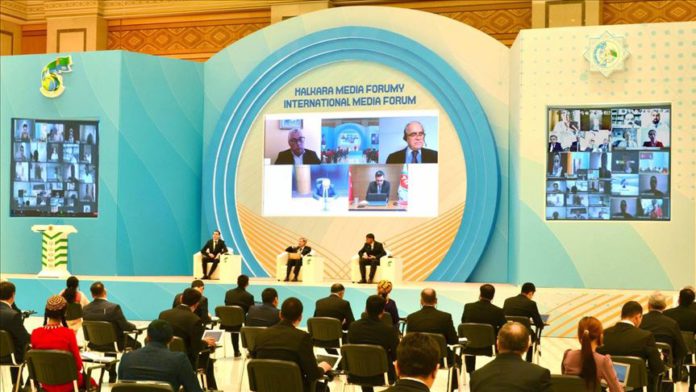 Turkmenistan on Wednesday hosted an international media forum via video conferencing dedicated to the 25th anniversary of adopting permanent neutrality as its foreign policy.

Jointly organized by Ashgabat and the Asia-Pacific Broadcasting Union (ABU), the media forum stated that Turkmenistan has been elected as vice-chairman of the upcoming 75th session of the UN General Assembly.

The participants hailed the expertise of Turkmenistan, noting that the country has already attended five different sessions as vice-chairman.

Ibrahim Eren, acting president of ABU and chairman of the Turkish Television and Radio Broadcasting Corporation (TRT), said that from the very beginning Turkmenistan has chosen this political course to promote global peace and stability.

In July 1992, Turkmenistan declared positive neutrality as part of its foreign policy at the Helsinki Summit of the Organization for Security and Cooperation in Europe.

“Turkmenistan’s neutrality has recommended itself as an actual mechanism of establishment of fruitful cooperation in many fields including the media and strengthening of friendly and neighboring relations,” Eren added.

Vempati said that the policy pursued by the country’s leader “fully coincides” with the course of strengthening good neighborliness in the region and globally.

In her speech, Nedra Weerasinghe, director of MTV Channel from Sri Lanka, said that the neutrality policy will help consolidate the position of the fairway in international forums.

Emmanuel Dupyi, head of the European Institute for Prospects and Security, who joined the forum online from France, stressed the neutral status of Turkmenistan has resulted in integration of Central Asian countries.

Alisher Hadzhaev, chairman of the National TV and Radio Company of Uzbekistan, said that the media forum reaffirms the aspirations of Turkmenistan to further strengthen stability and peace, socio-economic prosperity in the region.

The event was held in Turkmenistan’s capital Ashgabat and attended by government officials, diplomats and over 300 international journalists.

WHO urges Africa to step up virus preventive measures