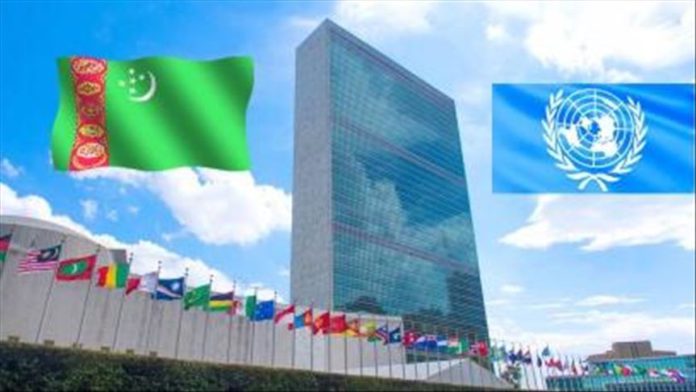 Turkmenistan on Friday organized Friday an international meeting on the coronavirus that has killed hundreds of thousands of people around the world.

The foreign ministry building in Ashgabat hosted dozens of foreign mission representatives, journalists, officials from the UN, EU and World Health Organization (WHO); it was also available for online participants.

Deputy Chairman of the Cabinet of Ministers and Turkmenistan’s Foreign Minister Rashid Meredov said international solidarity was of the utmost importance at times of such global problems and his country fully supports foreign organizations and initiatives in combatting the novel coronavirus.

He said the effect of the pandemic could be reduced through collaboration at the national and international levels, and material and technological support were of “key” importance to deal with the burden of the outbreak.

“Special attention should be paid to the development of scientific cooperation in the field of medical science,” he said, while noting the creation of a scientific universal platform to carry out a dialogue between medical scientists was a necessity.

Meredov further noted that his country was in close contact with representatives of foreign missions and shared experiences to be prepared for the effects of the virus on the medical, social and economic levels.

“One of the main purposes of this platform is to promote Turkmenistan’s international health initiatives, which has become a priority topic for recent briefings,” he said.

Additional measures were taken at border crossings with neighboring countries in a bid to prevent a possible spread of the virus, he said, and studies were at the final phase and would be realized very soon.

The Minister of Health and Medical Industry of Turkmenistan Nurmuhammet Amannepesov said protection of the population was the priority of the state and the government has taken measures, such as modernization of health system, to that goal.

He said Turkmenistan was in close touch with international organizations amid the coronavirus outbreak and it appreciated fruitful cooperation with the WHO and shared information on a constant basis.

The top doctor also said the government attached great importance to monitoring at border crossings through a robust control mechanism in which travelers were tested.

EU Ambassador to Turkmenistan Diego Ruiz Alonso said the bloc is active during the pandemic and provides humanitarian aid to various countries with a budget in the billions of euros depending on needs and status.

He said Turkmenistan was not eligible for money allocated for Central Asia because if its status as a country with upper-middle-income level, but his agency was working on an additional package from which Turkmenistan could benefit.

The pandemic has infected more than 5.2 million and killed nearly 340,000 people, while an excess of 2 million patients have recovered, according to figures compiled by US-based Johns Hopkins University.

Oxford virus vaccine has some success with monkeys