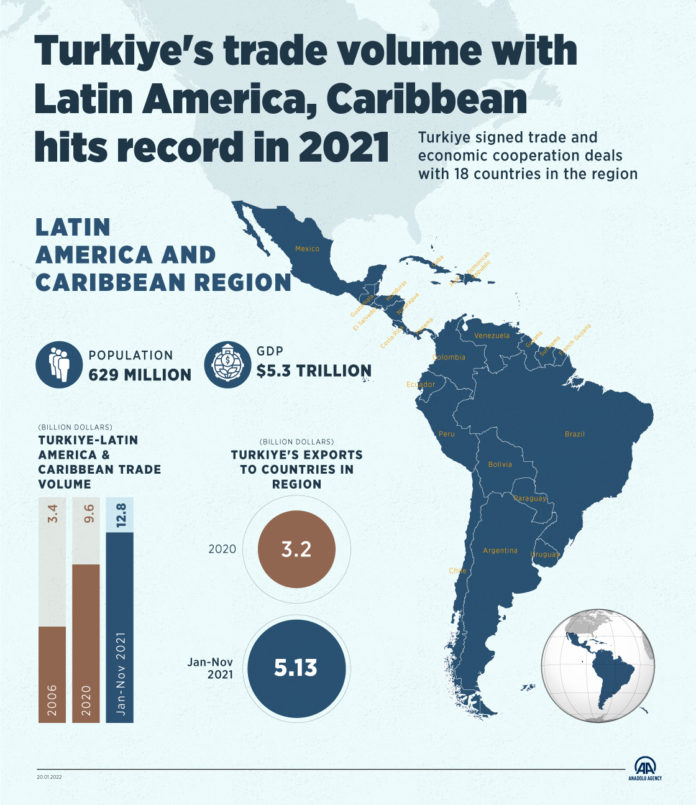 As Turkiye strengthens its political and economic ties with Latin American and Caribbean countries, Turkish exports to these nations hit a record level of $12.8 billion in January-November last year.

Amid a visit by Salvadoran President Nayib Bukele on Thursday, relations between Latin America and the Caribbean are once again on the agenda for Turkiye.

Turkiye has been pursuing a more active policy towards these countries in recent years in order to improve its relations with Latin America and the Caribbean.

The necessary legal infrastructure has been introduced for a joint economic commission as part of Turkiye’s commercial and economic cooperation agreements with 18 countries in the region, including Brazil, Mexico, Argentina, and Colombia.

Turkiye’s free trade agreement (FTA) with Chile entered into force in 2011 as did another with Venezuela in 2020. FTA negotiations are ongoing with Ecuador, Colombia, Mexico, and Peru.

In this context, Turkiye aims to sign an FTA with regional organizations, such as the Caribbean Community, the Southern Common Market (MERCOSUR) and the Pacific Alliance.

According to data from the Turkish Statistical Institute, Turkiye’s foreign trade volume with this region reached an all-time high of $12.8 billion in January-November last year.

The country’s exports to Latin America and the Caribbean reached $5.13 billion during the same 11-month period, thus already exceeding all annual export figures in the past.

In 2020, Turkiye’s exports to the region amounted to $3.2 billion, while its imports were totaled $6.4 billion.

Bilateral trade volume was around $3.4 billion in 2006, when the roadmap for opening up to the region was created.

Brazil stands out in exports and imports

The main part of Turkish exports was in the iron and steel sector with $1.9 billion.

Brazil was also the origin of the most imports Turkiye received from the region with a total of $3.5 billion, followed by Colombia with $1.4 billion, Mexico with $793.5 million, Venezuela with $427.9 million, and Chile with $320.2 million.

Mineral fuels were the most highest import with $1.4 billion.

Economic relations between the two countries are expected to develop further with Bukele’s visit.

President Recep Tayyip Erdogan’s regional tour, which included Mexico, Colombia, and Cuba in 2015, was the second presidential visit in 20 years.

Erdogan visited the region, which included Chile, Peru, and Ecuador in 2016, as well as Argentina, Paraguay, and Venezuela in 2018.