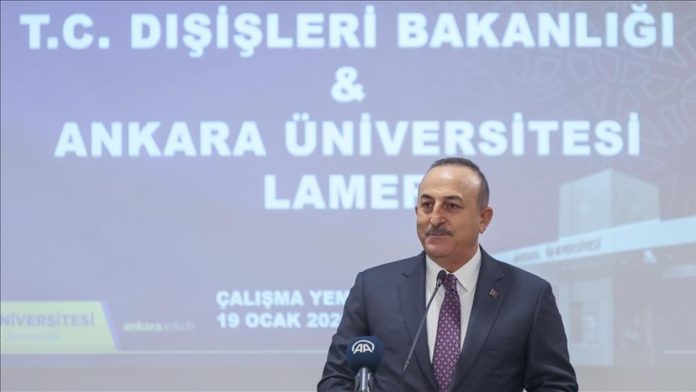 Turkiye’s goal in its relations with Latin America is to deepen the country’s cooperation with the region for a common future with a team spirit, Turkish Foreign Minister Mevlut Cavusoglu said Wednesday in a meeting with ambassadors from Latin American countries.

Cavusoglu held a working meeting at Ankara University in the capital with the ambassadors of Latin American countries and the presidents of the Parliamentary Friendship Group.

During the event, Cavusoglu said the Center for Latin American Studies (LAMER) at Ankara University has made a very valuable contribution to Turkiye’s relations with Latin America and they support these studies as the Turkish Foreign Ministry.

He noted that he will first meet with his Salvadoran counterpart for breakfast Thursday morning and then announced that they will take part in the opening of the Embassy of El Salvador in Ankara together.

Turkiye pursues a multifaceted and multi-dimensional foreign policy, he said, adding: “We are a nation that can speak to both the West and the East at the same time, and have much in common with different geographies.”

To see this, it will be enough to look at the international events hosted by Turkiye last year alone, despite the coronavirus pandemic, he said.

‘We invite everyone from all over world’

Cavusoglu said they expect wider participation from Latin America this year at the second Antalya Diplomacy Forum (ADF), which will be held on March 11-13, adding: “The number of foreign ministers who have confirmed their participation so far has exceeded six.”

“Confirmations of participation are coming from all over the world. Out of the total worldwide, the number of confirmed foreign ministers so far has been 39,” he noted.

Stating that they expect everyone to participate in the ADF, he said: “We invite everyone from all over the world. Everyone’s voice will be heard here.”

He also recalled that 16 heads of state and 100 ministers also attended the 3rd Turkiye-Africa Partnership Summit.

Noting that he hosted 79 of his counterparts from five continents in Turkiye last year, Cavusoglu said that this year has started quickly and that he would meet with his El Salvadoran and Estonian counterparts Thursday.

He stressed that Turkiye’s African initiative policy has turned into a “partnership” policy, saying that they have created an action plan for the next five years with African countries and the African Union and have established a common mechanism for monitoring its implementation.

Noting that Turkiye is extremely pleased to develop cooperation with Latin American countries, Cavusoglu said: “We will conduct a Latin American tour in March, which will cover several countries.”

“An invitation has arrived from Brazil. We will start from the south and visit four or five countries, all the way to Central America.”

“We will strengthen our ties even more. We hope that we will hold important talks with our counterparts and, if they agree, with the leaders, in order to take our relations further,” he emphasized.

He also reminded that Turkiye is already in close cooperation with international organizations in the Latin American region.

Turkiye is an observer country in organizations such as the Organization of American States (OAS), the Central American Integration System (SICA), the Association of Caribbean States (ACS), the Caribbean Community (CARICOM) and MERCOSUR, he said.

He conveyed that he wants to hold the next meeting with SICA in Turkiye at the level of leaders, saying that the parliament also plays an active role in developing relations with Latin America.

Mentioning that the total volume of trade between Turkiye and the Latin American region was $1 billion in 2002, Cavusoglu said: “We realized it as $15 billion in 2021.”

“There is a 43% increase compared to a year ago,” he said, adding this means Turkiye “can double or triple the total trade volume of $15 billion in the coming years.”

Cavusoglu said they encourage Turkish companies to increase their investments in the region and to take on important projects implemented by Latin American countries.

“We need to set the bar higher. We need to move economic relations further and sign free trade agreements at the bilateral and MERCOSUR level.”

He also stressed that barriers to trade should be removed.

Cavusoglu pointed out that Turkiye and Latin American countries should also strengthen ties between their peoples and noted that they have taken important steps in this sense.

He noted that Turkish Airlines (THY) flights to eight destinations from seven countries in Latin America serve as an important bridge, adding the Turkish Foreign Ministry gives all support possible to Turkish Airlines.

Turkish Airlines is really not only building a bridge between Turkiye and these countries, he said, as the company also serves as a bridge with every other country worldwide.

Recalling that the Turkish Cooperation and Coordination Agency (TIKA) has two regional offices in Mexico and Colombia and has implemented 440 projects, Cavusoglu said some other Latin American countries also have requests and proposals in this direction and TIKA is evaluating them.

He noted that they see that there is a great interest in Turkish culture and language in Latin America, saying that the Yunus Emre Institute (YEE) has opened online programs and there are thousands of applications for them.

The Presidency of Turks Abroad and Related Communities (YTB) is also increasing interest in Turkish scholarships, so they should also increase the number of scholarships awarded to each country in the region, he said.

Exhibition consisting of documents from archive to be opened Friday

Cavusoglu noted that 2021 and 2022 are the 200th anniversary of the independence of seven Latin American countries.

In this context, he said, Turkiye is opening an exhibition consisting of documents in its archives to the public at Dolmabahce Palace in Istanbul on Friday.

“Our goal in relations with Latin America is to deepen our cooperation for a common future with a team spirit,” Cavusoglu said, adding they are working in this direction and will give the strongest support to all the work to be done.