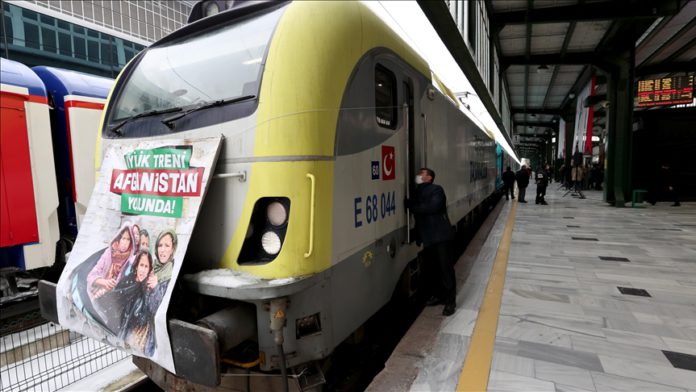 A special “charity train” carrying 750 tons of emergency goods under the coordination of Turkiye’s government left for Afghanistan from the Turkish capital Ankara on Thursday.

The train, with aid from 11 humanitarian organizations coordinated by the state Disaster and Emergency Management Presidency (AFAD), is bound for a journey of 4,168 kilometers (3,590 miles), according to Turkiye’s Transport and Infrastructure Minister Adil Karaismailoglu.

“We have two trains with 47 wagons, carrying approximately 750 tons of charity goods,” Karaismailoglu he said, adding that the train will reach Afghanistan after first passing through Iran and Turkmenistan.

Citing the start of an Islamabad-Tehran-Istanbul cargo train last December, he said the charity train will travel the corridor in 16 days.

For his part, Interior Minister Suleyman Soylu stressed that 12.9 million children in Afghanistan are in need of aid due to extreme weather conditions.

Turkiye will always side with the people of Afghanistan, he said, adding: “For the past four years, we have been the country, the nation that has given the most aid in the world.”

Aid agencies describe Afghanistan’s plight as one of the world’s most rapidly growing humanitarian crises.

According to UN humanitarian coordination office OCHA, half the population now faces acute hunger, over 9 million people have been displaced, and millions of children are out of school.

Previously, the UN and its partners launched a $4.4 billion funding appeal to avert a humanitarian catastrophe in Afghanistan in 2022.

UN chief Antonio Guterres has also warned that millions of Afghans are on the verge of death, urging the international community to release Afghanistan’s frozen assets and jump-start its banking system.

France will not end fight against terrorism due to Mali’s ‘irresponsible’...