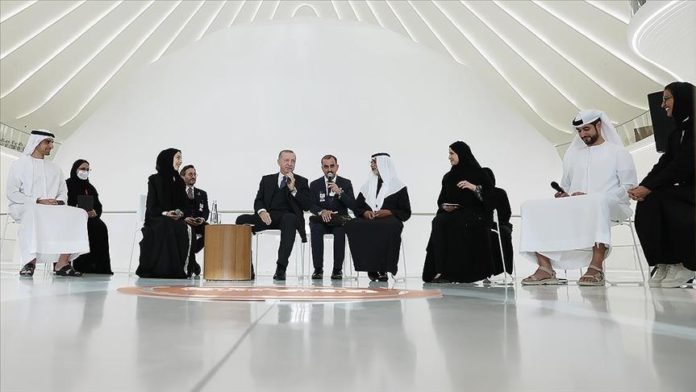 Turkiye and the United Arab Emirates are taking new steps to strengthen cooperation between the youth of the two countries, according to Turkish President Recep Tayyip Erdogan.

Enhanced ties and exchanges between the youth will be a common area of interest for Turkiye and the UAE in the coming years, Erdogan said in an interaction with youngsters at the Dubai Expo on Tuesday.

He said the countries expect their young population to act as “voluntary envoys.”

“As two friendly and brotherly countries, we have a wide range of serious cooperation opportunities. I see that we share similar visions, especially in the fields of space programs and innovative technologies,” he said.

Turkiye is aiming for a “hard landing on the Moon” with its domestically built rocket next year, Erdogan added.

He stressed that Turkiye and the UAE “must rapidly work on joint efforts in areas such as space, science, technology and start-ups.”

Ties between Turkiye and the Arab world are experiencing a major thaw after years of tense relations.

The Turkish president, who last visited the UAE in 2013, was in the country for a two-day visit this week at the invitation of Abu Dhabi Crown Prince Sheikh Mohammed bin Zayed Al Nahyan.

The crown prince’s visit to Turkiye in November 2021, which led to the announcement of a $10 billion fund for investments in Turkiye, was a crucial turning point in bilateral ties.