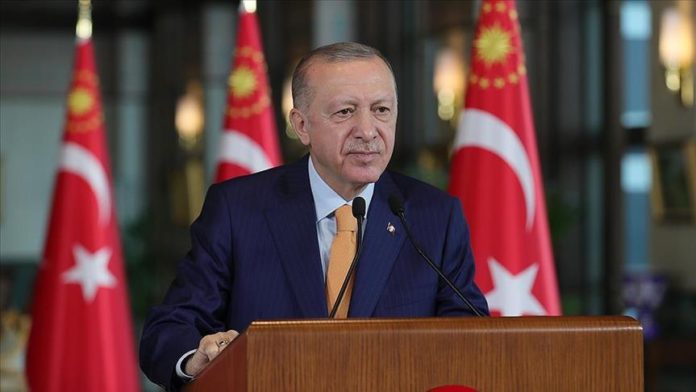 The Turkish president announced on Wednesday that the country would be sending a “charity train” to Afghanistan carrying emergency goods.

Speaking after a Cabinet meeting in the capital Ankara, Recep Tayyip Erdogan said the train, carrying 700 tons of food, clothing, and health and emergency goods are to be sent with the support of 10 non-governmental organizations under the coordination of Turkiye’s Disaster and Emergency Management Presidency.

Aid agencies describe Afghanistan’s plight as one of the world’s most rapidly growing humanitarian crises.

According to UN humanitarian coordination office OCHA, half the population now faces acute hunger, over nine million people have been displaced and millions of children are out of school.

Last week, the UN and its partners launched a $4.4 billion funding appeal to avert a humanitarian catastrophe in Afghanistan in 2022.

UN chief Antonio Guterres has warned that millions of Afghans are on the verge of death, urging the international community to release Afghanistan’s frozen assets and jump-start its banking system.

President Erdogan also commented on the situation in Turkiye, saying there would be a “very different picture” of the country next year. He vowed to continue pursuing goals towards a stronger future.

Commenting on his recent annual meeting with EU envoys, Erdogan said they had assessed the past and current state of ties between Turkiye and the bloc, discussing points of impasse and proposed ways to resolve them.

In December, the USD/TRY exchange rate neared 20. But after the new system was announced, the lira gained significant value with a substantial decline in domestic interest in foreign currency.

Turkiye also seeks to persuade people to put their gold into the financial system, the president added.

He said with the support of the country’s Credit Guarantee Fund, preparations are near completion for a package envisaged to provide employment protection and development priority loans.

“We ask for your support to make Turkiye a place where everyone does their work and holds their savings in Turkish liras,” he added.