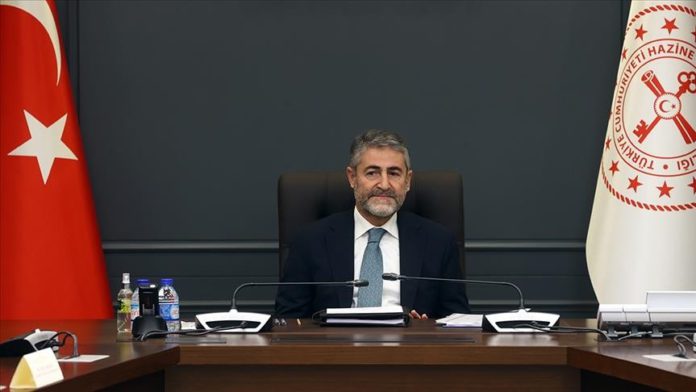 After inflation peaks this month, Turkiye will enter general elections in mid-2023 with single-digit inflation, according to the country’s treasury and finance minister.

In addition to the state of the economy when the next elections are set to be held, Nureddin Nebati addressed a range of topics, from planned steps in Turkiye’s new economic model to the progress in its new FX-protected deposits program.

“There will be a decrease (in inflation) this May with the decline in food and energy prices,” he added.

Explaining that he believes annual inflation peaked this January, driven by factors such as the rise in the exchange rate and wage hikes for workers, Nebati said the recent stabilization of the Turkish lira’s exchange rate is an advantage.

Turkiye posted a 36% annual hike in consumer prices in 2021, the highest in 19 years, according to TurkStat, the country’s statistical authority.

“We’re currently carrying (the effects of) the hump of December,” Nebati explained. But, he added, now we are “entering a period in which the effects of a decrease in food prices and inflation worldwide can be seen.”

While supporting the Central Bank’s decision to monitor the effect of the monetary easing in the first quarter, Nebati said: “I don’t know how the Central Bank will make a decision.”

He added: “We need to wait and see what happens in January, February and March.”

“The year 2022 will be one of turnaround, stability and one where things get back on track,” Nebati said.

On growth expectations for 2022, he stressed: “I’m saying something assertive: Regarding growth, I see an appetite in the market.”

Saying he predicts single-digit growth in the same period, Nebati added: “It will be a single digit. Even if you leave Turkey alone, it will see 5% expansion.”

He explained that as of late Wednesday, some 300,000 people had signed up for the government’s new foreign exchange-protected deposit program, a measure announced on Dec. 20 by President Recep Tayyip Erdogan.

“The amount we received here exceeded 126 billion liras ($9.3 billion) as of Wednesday,” he said.

This figure shows that an average of 10 billion lira ($740 million) is going into the system every day, he added.

The introduction of the new deposit system, which protect depositors from losses due to rising exchange rates, was welcomed by Turkish investors as well as the local lira currency, which gained back some of the losses it had taken in previous weeks.

The government had argued that the exchange rate fluctuations ignored the country’s strong economic fundamentals.

The benefits of Turkey’s new economic model, which began late last year, will become clear in the next three to six months, according to Erdogan.

The economic climate in Turkey will be “completely different” this summer when the financial system has reached a balance, he added.

US arrests man in hate crime against Turkish restaurant