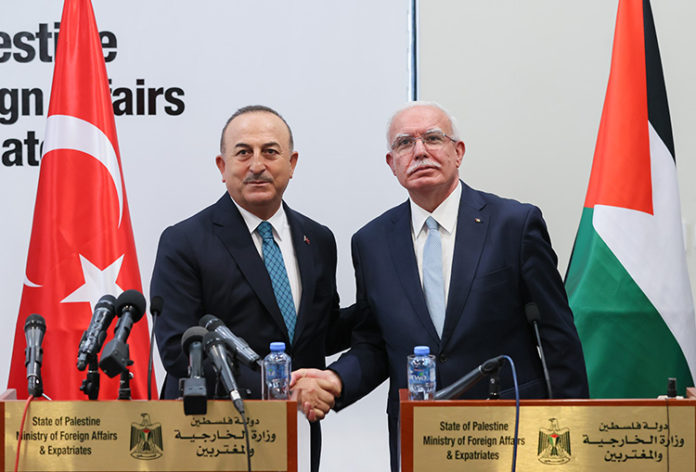 Turkiye will continue to stand by Palestinian people for independent and sovereign Palestine, the country’s foreign minister said on Tuesday.

Speaking at the joint news conference with his Palestinian counterpart Riyad al-Maliki in the West Bank city of Ramallah, Mevlut Cavusoglu stated that Turkiye will pursue normalized ties with Israel in coordination with Palestinian Authority.

The Palestinian issue is independent from the normalization process with Israel, he stressed.

Cavusoglu also said relevant ministers of Turkiye and Palestine will meet at the end of June to discuss economic ties.

For his part, Riyad al-Maliki said that the two top diplomats discussed Israeli violations in Palestinian territories and other concerns.

He hailed the “distinguished, authentic, and strong ties” with Turkiye.

The plane carrying Cavusoglu landed at the Ben Gurion Airport in Tel Aviv on early Tuesday where he was welcomed by Israeli officials.

Later, Cavusoglu made his next stop at the West Bank city of Ramallah and visited the Palestinian Foreign Ministry.

Ahead of the bilateral meeting with al-Maliki, he chaired the second meeting of the Joint Committee of the Palestinian and Turkish Foreign Ministries which was established in 2010.

Following his meetings in Palestine, the Turkish foreign minister will pay an official visit to Israel on Wednesday and hold talks with his Israeli counterpart Yair Lapid on bilateral relations and regional and international matters.