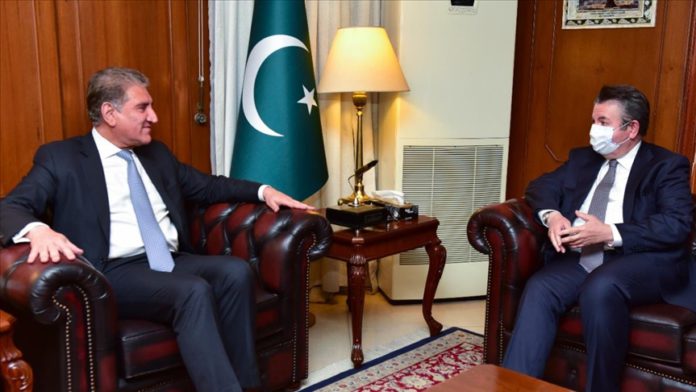 Turkiye and Pakistan on Tuesday held consultations to review bilateral relations and ways to further strengthen cooperation in several areas, including trade, investments and regional security.

The two countries held “bilateral political consultations” at Pakistan’s Foreign Ministry in the capital Islamabad, the ministry said in a statement.

The Turkish delegation was headed by Deputy Foreign Minister Sedat Onal and the Pakistani side was led by Foreign Secretary Sohail Mahmood.

“During the consultations, both sides reviewed the entire spectrum of bilateral relations as well as opportunities to further strengthen cooperation in diverse areas including trade, investments and economic cooperation,” read the statement.

They exchanged views “on the ongoing preparations for the 7th Session of the High-Level Strategic Cooperation Council (HLSCC) and the implementation of the Strategic Economic Framework (SEF) that was signed between the two countries in February 2020,” it added.

“It was noted with satisfaction that the Joint Working Groups (JWGs) under the HLSCC held their meetings in preparation for the HLSCC,” the statement said.

Afghanistan was an area of particular focus during discussions on regional issues, the ministry said.

Islamabad, according to the statement, emphasized the “urgent need for scaled-up humanitarian assistance and measures for stabilization of Afghanistan’s economy,” adding that release of frozen assets “would provide impetus to long-term sustainable development for the Afghan people.”

Mahmood reaffirmed that Pakistan would continue to provide humanitarian assistance to Afghanistan, underlining that sustained practical engagement was “key to advance the shared objectives of a peaceful and stable Afghanistan.”

He also briefed the Turkish side on the “continuing grave human rights violations” in Indian-administered Jammu and Kashmir, and thanked Ankara for its “consistent and principled support” on the long-running dispute.

“The two sides expressed satisfaction on close cooperation at multilateral fora, including the UN, OIC, ECO and D-8, and reaffirmed their resolve to continue collaboration on global and regional issues of mutual interest,” the statement further said.

Mahmood said long-standing fraternal relations between Islamabad and Ankara are “exemplary, marked by mutual trust, commonality of views, and close cooperation on the whole range of bilateral, regional and international issues.”

As Turkiye and Pakistan prepare to mark the 75th anniversary of establishment of diplomatic relations this year, the two sides “agreed to celebrate this important milestone in a befitting manner,” the statement said.

The next round of bilateral political consultations will be held in Turkiye on dates to be determined through the diplomatic channels, it concluded.​​​​​​​

Onal also met Pakistani Foreign Minister Shah Mahmood Qureshi at the ministry to discuss a range of issues relating to strategic cooperation and regional security, including Afghanistan, according to a separate statement.

Qureshi noted that Ankara and Islamabad share a similar stance on the ongoing situation in the war-torn country, and “highlighted importance of close consultations between the two countries.”

He also thanked Turkiye for its “perpetual” and “unequivocal” support to Islamabad on the Kashmir dispute.