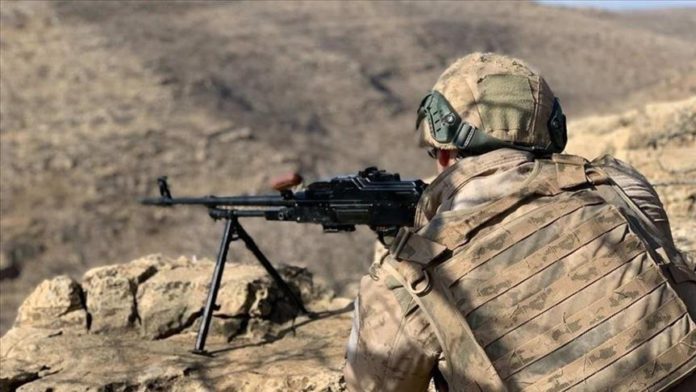 More than 100 PKK/YPG terrorists have been “neutralized” by Turkish security forces as part of Turkiye’s Operation Claw-Lock in northern Iraq since the start of this year, the country’s national defense minister said Wednesday.

During a visit to Turkiye’s border with Iraq near the Operation Claw-Lock zone, Hulusi Akar told reporters that by successfully completing the latest operation, the country will secure its borders.

“Our Claw-series operations are continuing. This is a chain, and the last link of the chain is Operation Claw-Lock. By successfully completing this operation, we will fasten the lock and ensure full control of our borders.”

The operation is being backed by ground and air fire support vehicles as well as drones, he said.

The so-called leaders of the terrorist organization are in panic mode, he said, adding that the PKK is disintegrating.

“All this is stated in intelligence reports,” the country’s defense chief said.

Turkiye will continue combating terrorism with ever-increasing force, and will finally get rid of “this terror curse,” Akar further said.

Debunking the myth that Kurds join PKK, he said: “Turks and Kurds are sisters and brothers.”

Proof of this unity is their cemeteries, he said, where Turks, Kurds and Arabs are buried side by side.

The operation only targets the terrorists, he reiterated.

Turkiye has launched successive operations against the PKK in northern Iraq since 2020, most recently starting Operation Claw-Lock in April to target PKK hideouts in Iraq’s Metina region.

That was preceded by Operations Claw-Tiger and Claw-Eagle, which were launched in 2020 to root out terrorists hiding in northern Iraq and plotting cross-border attacks in Turkiye.

In its more than 35-year terror campaign against Turkiye, the PKK – listed as a terrorist organization by Turkiye, the US, and European Union – has been responsible for the deaths of over 40,000 people, including women, children and infants.

Turkey: Central Bank reserves at $84.5B in October