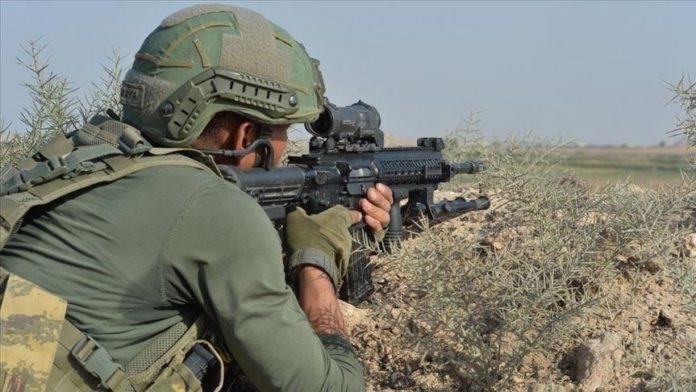 Ismail Catakli briefed reporters in the capital Ankara on ongoing anti-terror operations, among other issues.

Turkish authorities use the word “neutralized” in statements to imply that the terrorists in question either surrendered or were killed or captured.

A total of 13 terrorists surrendered to Turkish security forces in operations carried out in January, he said, and at least five terror attacks were thwarted.

Of the neutralized terrorists, 38 belonged to the PKK, while others were from far-left groups and Daesh/ISIS, he added.

Giving further details, he said 7,795 operations were carried out in rural areas, while 1,315 in urban centers.

In its more than 35-year terror campaign against Turkiye, the PKK – listed as a terrorist organization by Turkiye, the US, and EU – has been responsible for the deaths of at least 40,000 people, including women, children, and infants.

Referring to the 19 irregular migrants, who were pushed back by Greece to Turkiye and eventually froze to death, Catakli said the incident was a symbol of the world’s apathy to the issue.

“What froze there was not only the migrants but also the European values and humanity,” he said.

EU, by overlooking Greece’s policies, became complicit in its crimes against humanity, he added.

The lifeless bodies of a total of 11 irregular migrants were found in northwestern Turkiye’s Edirne province, which borders Greece, on Wednesday. Another perished later at a hospital.

Turkiye’s Interior Minister Suleyman Soylu said the irregular migrants were stripped of their clothes and shoes by Greek border units who then pushed them back to the Turkish territory.

The next day, seven other irregular migrants were found dead in the same region, raising the death toll to 19.

Greece, for its part, argued that Turkish authorities’ statements were unfounded claims and alleged that the irregular migrants “never made it as far as the (Greek) border.”