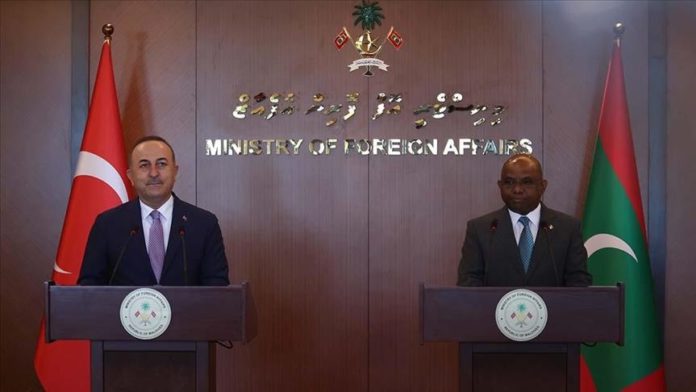 Turkiye and the Maldives have agreed to establish a joint economic committee, the Turkish foreign minister said on Sunday.

In an official visit to the archipelagic nation, Mevlut Cavusoglu held a joint press conference with his Maldivian counterpart Abdulla Shahid in the capital Male, noting that this committee would help deepen the two countries’ economic cooperation and increase their bilateral trade volume.

Cavusoglu underlined that the two countries’ bilateral trade volume had doubled last year, adding that one of the agreements signed during his visit was on trade and economic cooperation.

The countries aim to increase their trade volume to $100 million over the next two years, he said, emphasizing that interest in the Maldives is rising among Turkish business circles and investors.

With many Turkish firms particularly keen on investing in the Maldives’ tourism sector, Cavusoglu said that the country had become an extremely popular tourist destination among Turkish citizens, with plans also to increase the number of flights between the countries.

Congratulating Shahid on his election as president of the 76th UN General Assembly, Cavusoglu said this was an indicator of the international community’s confidence in the Maldives.

He underlined that Turkiye would keep supporting the Maldives in international fora, stating that their cooperation and coordination would continue at the Organization of Islamic Cooperation and the UN, and other platforms.

Cavusoglu also stressed that Male had Ankara’s backing in its bid to host the UN Human Rights Council.

Climate change is another common concern between Turkiye and the Maldives, and the two countries have signed a cooperation agreement on this issue, as well, he stressed.

The two countries will maintain their cooperation and continue exchanging ideas on climate change and the environment, he said, adding that Turkiye was in favor of financial and technical support for fragile and least developed countries in relation to environmental issues and climate.

Cavusoglu noted that the fight against terrorism and radicalism was another area of bilateral cooperation and an extremely important priority for Turkiye.

Expressing Ankara’s readiness to share its experience on these issues with the Maldives, Cavusoglu urged Shahid to be “careful and vigilant” about the Fetullah Terrorist Organization (FETO), which was behind a failed 2016 coup attempt in Turkiye and has a considerable presence outside of the country, as well.

Cavusoglu invited Shahid to the Antalya Diplomacy Forum, slated to be held in March in the Turkish Mediterranean resort city of Antalya.

He said they had also discussed religious cooperation, including the establishment of an Islamic Center.

FETO and its US-based leader Fetullah Gulen orchestrated the defeated coup of July 15, 2016 in Turkiye, which left 251 people killed and nearly 2,200 injured.

The terror group also has a considerable presence outside Turkey, including private educational institutions that serve as a revenue stream for the terrorist organization.

For his part, Shahid also said that during their talks, he and Cavusoglu touched on important issues and discussed different areas of cooperation such as education, youth, sports, health, tourism, fishing, agriculture, environment, climate change, combating terrorism.

He said that the cultural cooperation agreement they signed sought to expand cultural ties between the Maldives and Turkiye.

Turkiye and the Maldives will continue supporting each other in multilateral relations, as well as in bilateral ties, Shahid said, including within the Organization of Islamic Cooperation.

He also said Male was evaluating a proposal by Turkiye for visa-free travel between them, stressing that such a move could make their already close relations even closer.