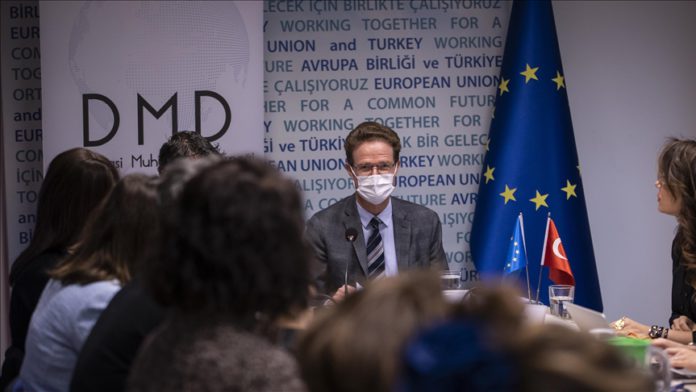 The EU is the largest trading partner of Turkiye,” the bloc’s top diplomat in Ankara noted Thursday, saying economic relations with the country are a very important cornerstone in ties.

Speaking to a group of reporters from the Diplomatic Correspondents Association of Turkiye, Nikolaus Meyer-Landrut hailed economic ties with Ankara as he expressed hope to continue to have “a conducive environment” to maintain cooperation with aims to expand on it.

Bilateral trade in the last 25 years has more than quadrupled, the head of the EU Delegation to Turkiye said, noting that “high-level dialogues” on a range of issues are to continue in the year to come.

Technical talks on the issue of the Customs Union are ongoing, EU envoy further said, adding that Turkiye and the bloc are “now working on the elements of a positive agenda,” including “a number of things which were possible, on which engagement is increasing, where cooperation is growing.”

On bilateral relations between Turkiye and the EU, Meyer-Landrut recalled the EU and European Council’s “strategic interest in a stable and secure environment in the eastern Mediterranean and the development of a cooperative and mutually beneficial relationship with Turkey.”

He also cited “the resumption of political high-level meetings,” as well as “high-level dialogues on climate migration, security and public health” during the past year.

He also said the first billion committed by the end of 2021 covers areas such “as basic needs, education, and migration and border management, which was an issue … particularly asked for by the Turkish authorities.”

Turkey is the largest host country for Syrian refugees, providing protection to nearly 4 million people who fled the civil war.

In the area of health, the EU envoy said there were “important results” as he cited the “mutual recognition of the COVID digital certificate from Turkey in the EU system.”

“And we have also been working together on the strengthening of Turkey’s laboratory network, linking it to early warning systems.”

“This is important in terms of spotting potential pandemics, allows swift responses and cooperation on this part of the fight against pandemics,” he added.

Meyer-Landrut said the EU recognizes and supports “the diplomatic efforts of Turkey as an important NATO ally.”

“The outreach Turkish government has been undertaking, particularly also to Arab countries over the last month helps and contributes to a more constructive environment in what we think should call our common geography,” he noted.