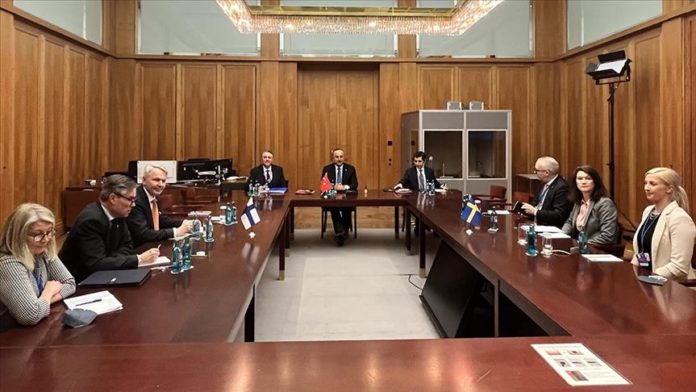 Turkish Foreign Minister Mevlut Cavusoglu on Saturday held a tripartite meeting with his Swedish and Finnish counterparts on their applications for seeking NATO membership.

“Met in Berlin with my colleagues @AnnLinde of Sweden & @Haavisto of Finland on the margins of @NATO Foreign Ministers’ Informal Meeting,” Cavusoglu said on Twitter.

Ahead of an informal NATO foreign ministers’ meeting, Cavusoglu said Sweden and Finland were “openly supporting and are engaging with PKK/YPG terrorist organization” which has been “attacking Turkiye and killing Turkish troops and people.”

“And that’s why the big majority of the Turkish people are against the membership of those countries who are supporting the PKK/YPG terrorist organization and they’re asking us to block this membership. But these are the issues that we need to talk about with our NATO allies, as well as these countries,” he added.

While evaluating the Turkish president’s statement regarding Sweden and Finland’s NATO membership process, Swedish foreign Minister Ann Linde said: “Like the EU, we believe that the PKK is a terrorist organization.”

According to the Swedish daily newspaper Aftonbladet, Linde said she will meet with Cavusoglu on Sunday.

“It is not true that we will not classify the PKK as a terrorist organization. If such a perception has arisen, it needs to be clarified,” she added.