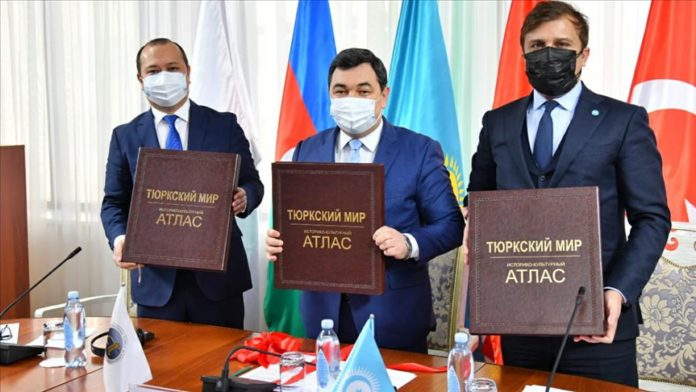 The cultural and historical atlas of the Turkish World prepared by the International Turkic Academy was introduced Friday in Kazakhstan’s capital of Nur-Sultan.

Among participants of the introduction of Turkish World: Historical and Cultural Atlas held by Darkhan Kydyrali, president of the International Turkic Academy were Turkey’s Ambassador to Nur Sultan, Ufuk Ekici, Azerbaijan, Kyrgyzstan and Hungary’s ambassadors, Kazakhstan’s deputies and Turcologists from more than 20 countries, Secretary General of the Parliamentary Assembly of Turkic-Speaking Countries.

“The atlas is the first work carried out in this field. It is difficult to write a world history without the Turkish world. With this work, we wanted to show the history of the Turkic world, which established great states and civilizations,” Kydyrali told Anadolu Agency.

Containing more than 200 historical maps, the atlas consists of six sections, he said. “We used the maps of old travelers from Greek, Arab, Persian, European and Russian, as well as Mahmud al-Kashgari, and the works of Muslim cartographers”.

They will translate the atlas into Turkish and English in the future, Kydyrali said.

“The atlas reveals the reality of the Turkish world and serves as a source for those who are curious about Turkish history.” he underlined.

Speaking on the reason why the atlas is published in Russian, he said: “First of all, most of the resources in this area belong to Russia. Secondly, most of the Turkish peoples today live in Russia and there is a large mass there. In addition, discussions about the Turkic world are increasing in Russia, this book will be a scientific answer to them.”