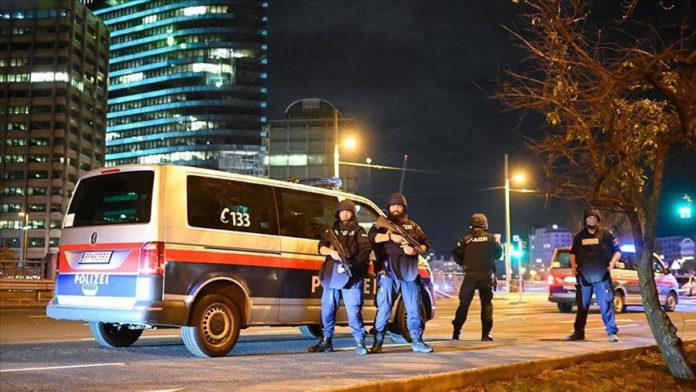 A young Turkish man revealed to Anadolu Agency on Tuesday the moments he witnessed in yesterday’s terrorist attack in Vienna which left four people dead and 22 wounded.

Mikail Ozen said he and his friend Recep Tayyip Gultekin went to a popular tourist area Monday evening, hoping to relax at a cafe before a new coronavirus lockdown took effect.

He said they heard gunshots as soon as they parked their car.

Ozen said Gultekin, who turned toward the gunshots, noticed a woman injured by one of the terrorists and carried her to a safe place.

Ozen said he did not think such an attack could ever occur in Austria.

He said Gultekin was in the line of fire, and as soon as he was able to escape after taking a bullet to his leg, they went to a nearby police station and reported what happened.

Ozen said they noticed an elderly woman while walking from the scene.

“The elderly woman, unaware of everything, was walking to the location of the incident. We explained the situation to her and took her to a safe place,” he said.

He noted that they did not leave the area afterward, thinking “maybe more people may need help.”

Explaining that the clash intensified after a short time and they witnessed a police officer being shot, Ozen said the officer lost a lot of blood and other officers “could not help.”

“‘Carry your friend to the ambulance!’ we shouted at them, but they said ‘Get out of here!’ However, we went to the place where the injured police officer was and took him safely to an ambulance.”

Noting that he could not get information about the officer, Ozen wished him a fast recovery.

“We wish Allah’s mercy on those who lost their lives and patience for their relatives. Religion, race are not important. Muslim or Christian does not matter. Terror has no race. We are against all kinds of terrorism,” he added.

Speaking at a news conference in Vienna, Interior Minister Karl Nehammer said the assailant, who was killed in a police operation after the attack, was a Daesh/ISIS terror group sympathizer.

“We have not yet found any evidence indicating a second attacker,” he said, adding the investigation was still ongoing.

The minister urged residents to exercise the utmost caution.

Authorities have confirmed that the 20-year-old assailant was known to police, being arrested last year for attempting to travel to Syria to join the Daesh/ISIS terror group.

The media identified him as Kujtim F., who had North Macedonian and Austrian citizenship.

He was released from prison in December because of his age.

Austrian police arrested 14 suspects Tuesday after raids at more than a dozen locations across the country.