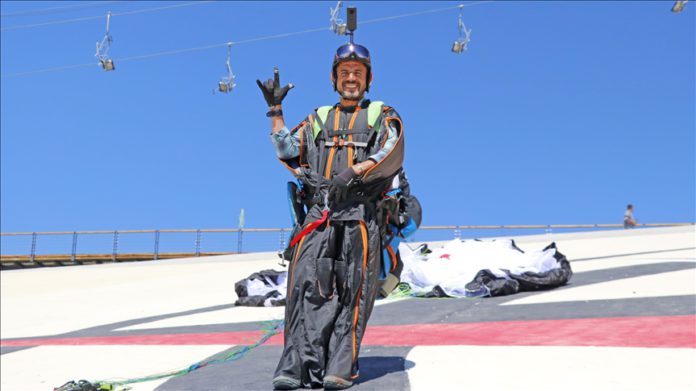 A Turkish man working at a cable car company glides home from work every day in his wingsuit through the slopes of the country’s southwest.

“I take 20-25 minutes to get from the main cable car station to Babadag. On the way home, in the evening, I take off with a paraglider and do a wingsuit jump,” said Cengiz Kocak, whose workplace is perched on the 1,965-meter-high Babadag in the Fethiye district of Mugla province.

Kocak told Anadolu Agency that he is the only athlete who practices wingsuit gliding and base jumping in Turkey.

His journey in the air lasts for three to four minutes, while the distance takes 40 minutes by car and 25 minutes by cable car.

“Practicing this every day contributes greatly to me and to my sport,” he stressed.

Kocak became a parachutist after practicing jumping from aircraft in 1991 while he was a military cadet, later becoming a skydiver.

Following his retirement in 2011, he took interest in base jumping and became a wingsuit jumper in Turkey after receiving training in the US state of California.

He participated in competitions on behalf of the Turkish Armed Forces and national team, with many national and international achievements. Kocak is known locally as the “batman.”

Famed for his discovery of new jumping points and jumps for wingsuit base jumping, he started working as general manager at the Babadag Cable Car 20 days ago.

Kocak takes a cable car to Babadag every morning and he leaves via paraglider in the evening. Then, he flies with his wingsuit to land in the Oludeniz area, enjoying a breathtaking birds-eye view on the way.

After landing, he takes a short journey by car to reach his home in the Ovacik area.

Kocak noted that many people from all over the world who watch his videos on social media want to come to Babadag and Oludeniz.

Stressing that he wants the number of athletes interested in air sports to increase, he said their company also supports athletes who would come to the region.

Babadag is a great opportunity to promote Turkey, especially in the field of air sports, according to Kocak.

“My job gives me the opportunity to practice sports that have become my lifestyle, like flying and jumping, every day,” he said.

Kocak said he also feels lucky as there may not be a second person who does what he does in the world.