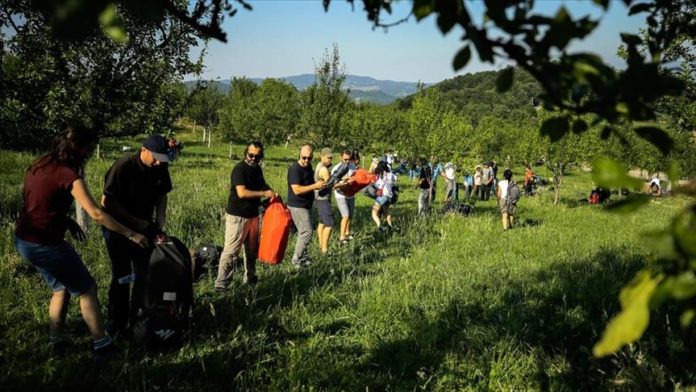 A group of 50 people from Turkey arrived Wednesday in Bosnia and Herzegovina and will join a three-day Peace March to commemorate the 26th anniversary of the genocide in Srebrenica.

Tahir Caner Besok told Anadolu Agency that he heard about the Peace March in 2014 from a documentary.

“We searched but couldn’t find much information while researching,” said Besok. “We couldn’t find any information about it anywhere, including internet sites in Turkey. We actually came here into obscurity. We didn’t know what the march would be like, what we would encounter.”

Tulin Ocal Demirkiran said it was her third time attending and she has felt the pain suffered in the war every time she participated.

“We all want peace. We are marching for peace. We do not want the war to recur. I think the Peace March should be promoted more institutionally. Because it was not just a march, but a symbol for Bosnia,” said Demirkiran.

Ebrar Arvas said she attended a collective funeral ceremony in 2019 where she was deeply impressed.

“I visited the memorial center in Srebrenica. I honestly did not know the gravity of the war. I was upset. I was angry with myself and shamed myself for not knowing,” she said.

Traditionally, thousands from all over the world come to Nezuk every year to participate in the march.

The march is expected to conclude at a cemetery in Potocari, a village in eastern Bosnia-Herzegovina, just northwest of Srebrenica, where a funeral prayer and burial ceremony will be held for victims.

Since 2005, thousands of people have attended the Mars Mira, or Peace March, following the same forest path used by Bosniaks when they fled the Srebrenica genocide.

More than 8,000 Bosnian Muslim men and boys were killed after Bosnian Serb forces attacked a UN “safe area” of Srebrenica in July 1995, despite the presence of Dutch troops tasked with acting as international peacekeepers.

Srebrenica was besieged by Serb forces who were trying to wrest territory from Bosnian Muslims and Croats to form a state.

The UN Security Council declared Srebrenica a “safe area” in the spring of 1993. But Serb troops led by Gen. Ratko Mladic overran the UN zone. Mladic was sentenced to life for war crimes, crimes against humanity and genocide.

Dutch troops failed to act as Serb forces occupied the area, killing about 2,000 men and boys on July 11 alone. Some 15,000 residents of Srebrenica fled to the surrounding mountains but Serb troops hunted down and killed 6,000 in the forests.

The bodies of victims were found in 570 different parts of the country.

What awaits world after pandemic?