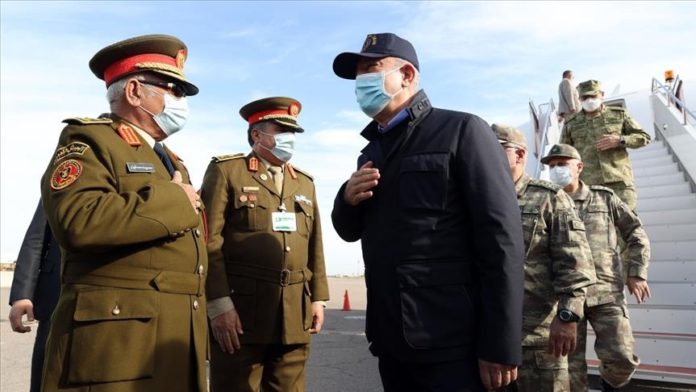 A visit by Turkish National Defense Minister Hulusi Akar and a high-level military delegation to Libya to inspect the Turkish troops deployed in the country is of great importance in terms of its timing and the critical messages it sent to the Libyan parties.

The visit took place at a time when negotiations between Libya’s conflicting parties reached a critical threshold.

Libyan journalists saw the visit as a message of support to Libya’s UN-recognized Government of National Accord (GNA) and an “intimidation” against warlord Khalifa Haftar.

Underlining that negotiations between Libyan sides came to a deadlock, Tehusai said Haftar still seeks to achieve his dream of Libya being governed by military rule.

The second reason that makes the visit important is the developments in the international arena regarding the Libyan crisis, Tehusai said.

“France seeks to increase its influence in southern Libya through Egypt. Therefore, the Abdel Fattah al-Sisi regime is making attempts to open a consulate in the south of Libya,” Tehusai added.

Libyan journalist Hamza Ahmed recalled a call by Haftar on Dec.24 for his forces to be ready for “war against the Turkish forces in Libya”.

Underlining that the visit of the Turkish delegation took place two days after Haftar’s threatening words against Turkey, Ahmed said: “Akar’s visit was an intimidation to Haftar.”
Libya has been torn by a civil war since the ouster of late ruler Muammar Gaddafi in 2011.

The GNA was founded in 2015 under aUN-led agreement, but efforts for a long-term settlement failed due to a military offensive by forces loyal to Haftar. He launched an onslaught on the capital Tripoli in April 2019 but was pushed back.

A cease-fire was agreed on in late October, and negotiations for an interim setup before presidential and parliamentary elections on Dec. 24, 2021, are continuing.