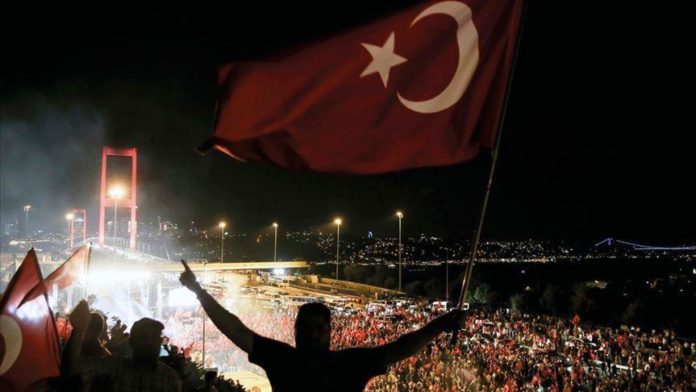 Commemoration events were held in various countries on Thursday – the fifth anniversary of the July 15, 2016 defeated coup when the Fetullah Terrorist Organization (FETO) tried to oust the government in Turkey.

July 15 is now marked in Turkey as Democracy and National Unity Day, an annual national holiday.

Ceremonies were held in countries including Morocco, Argentina, South Africa, Kosovo, Iran, Pakistan, Libya, Afghanistan, Greece and several European countries to remember the 251 people killed by FETO, and salute thousands who were injured while fighting for democracy and rule of law.

He thanked the Moroccan government for shutting down schools, organizations and companies linked to the terror group.

Dogan paid tribute to Jaouad Merroune, the Moroccan citizen who was killed by putschists on the fateful night.

A gathering was also held at the Turkish mission in South Africa’s capital Pretoria. Ambassador Aysegul Kandas said the reaction of Turkish people after the coup attempt proved that they can sacrifice their lives for sake of their country and democracy.

The Turkish embassy in Buenos Aires, Argentina organized a memorial where prayers were recited, and a moment of silence was observed to remember the fallen heroes.

In his speech, Ambassador Sefik Vural Altay said the defeated coup is an evidence of the threat FETO posed to Turkey.

Thanks to Turks’ loyalty to democracy, constitutional order and their gallantry, it was prevented, he added.

In Serbia’s Sandzak, where there is a large Bosnian population, a football tournament was held in the memory of those killed amid the coup attempt.

A commemoration event was also held in Iraq’s Erbil by the Turkish diplomatic mission. Consul General Hakan Karacay said the putschists, despite possessing battle tanks, fighter jets and helicopters, were not able to bypass the Turkish nation.

Turkey’s embassy in Prague organized a session in which former president Vaclav Klaus participated. Ambassador Egement Bagis said July 15 has a key role in contemporary Turkish history as millions of unarmed civilians took to the streets and resisted putschists with bare hands, and eventually achieving the impossible.

Bagis said FETO was not just a threat for Turkey but the whole world.

Ihsan Mustafa Yurdakul, the Turkish ambassador to Pakistan, said Islamabad stood with Turkey right after the coup started, and the Turkish nation would never forget the stance of Pakistanis.

He said both the countries have paid a price for their fight against terrorism.