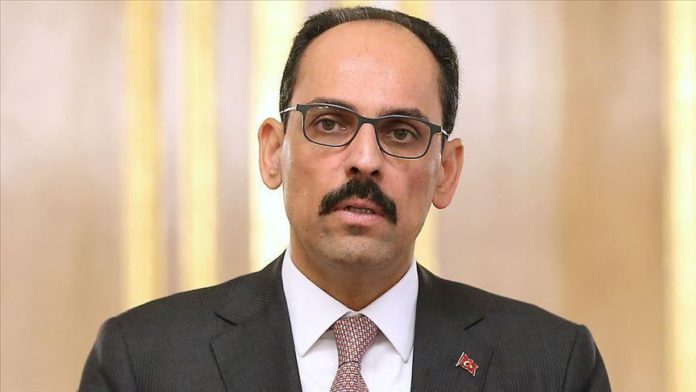 A senior Turkish official on Saturday answered questions surrounding Turkey’s reconversion of the Hagia Sophia, an Istanbul landmark, into a mosque, stressing that the religious iconography in the sixth-century complex would be preserved.

Questioning why the former museum was “turned into a museum in the first place,” presidential spokesman Ibrahim Kalin underlined that its religious icons would remain “untouched” for the viewing of people of all faiths.

In an interview with TRT World and BBC, Kalin underlined that the move to turn the Hagia Sophia, which had served as a mosque for nearly half a century, back into a Muslim place of worship had the support of all parties in Turkey.

“There is overwhelming support and consensus on this issue if you look at the political parties, the opposition parties, the republican party, they all supported this issue,” he said.

Dismissing claims as untrue that world historical heritage would be “shadowed or destroyed” by the decision, Kalin said: “In regards to the arguments of secularism, religious tolerance and coexistence, there are more than four hundred churches and synagogues open in Turkey today.”

On Twitter, Kalin stressed that all visitors would have access to the religious and cultural heritage of the Hagia Sophia, including its icons and mosaics.

“Any claim to the contrary is simply false,” he said.

On Friday, a Turkish court annulled a 1934 cabinet decree, which had turned Istanbul’s Hagia Sophia into a museum.

This verdict by the court paved the way for its use again as a mosque after 85 years.

President Erdogan said the historical complex would be ready for worship by July 24 for Friday prayer.

76 Turkish patients evacuated from abroad in 2019

Turkey: Some 14,000 returnees from abroad in quarantine