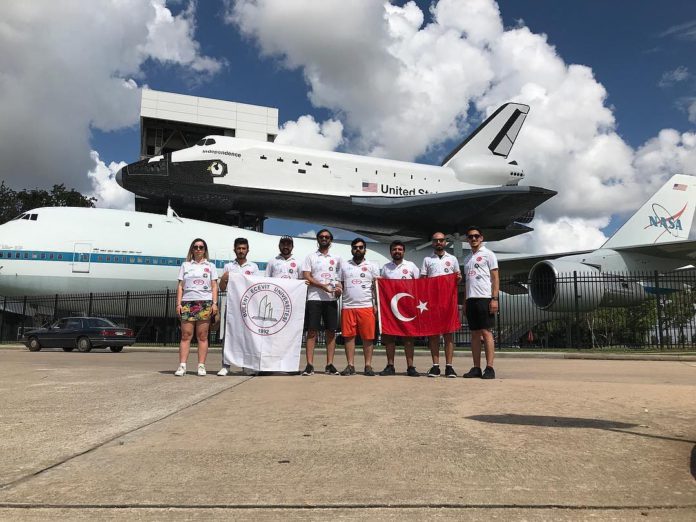 A team of Turkish engineering students will send a miniaturized satellite into space at the end of the year.

“The satellite will be sent into space in December with SpaceX’s Falcon 9 rocket from the Cape Canaveral Space Launch Complex in the US,” he said.

Established in 2016 by Bulent Ecevit University students in the Black Sea province of Zonguldak, Grizu-263 aims to work on space and satellite technologies and participate in international competitions.

“These are very exciting developments for us. A journey from Zonguldak to space,” said Dursun.

The team was named after a firedamp explosion in a mine in the Kozlu district in 1992, which led to the deaths of 263 miners. Firedamp is grizu in Turkish.

The team head said PocketQubes minimize launch costs of rockets and production time as well as damage a satellite could receive, giving the producer an advantage in space technologies.

“Also, since we have produced our satellite completely by ourselves, it will be a great gain and innovation for us. We shrink the technology and fit it into a 5x5x5cm [2x2x2inch] satellite,” he said.

“The realization and completion of such a large project by a group of undergraduate studetns will provide fully trained manpower for our country,” he said.

In its first year, the eight-person team took part in the CanSat model satellite competition held by the American Astronautical Society in the US, sponsored by NASA, Lockheed Martin, Kratos Space, Praxis Inc, Siemens, and US Naval Research Laboratory.

Grizu-263 placed 25th among 96 teams in the competition that is considered the most prestigious student competition globally in the model satellite field.

“We gained a lot of experience in the competition process and we have gained valuable outcomes for the coming years,” Dursun said.

In light of the experiences gained in the US, the team was recreated with an institutional structure.

“We started recruiting members of our team through an online application form and accepting into the team after a project and interview. In this way, friends who are eager to work in space and satellite joined us. Now we are a 15-person team,” he said.

In their second try at CanSat, Grizu-263 finished second.

“On the day of the award ceremony, there was a high expectation on the team,” he said.

“We were sure that we would be in the top five, and we completed the competition claiming the second place,” Dursun said.

“We were so proud to have achieved such great success for us as students from an Anatolian university. We saw this success as a milestone and have always continued to work harder for our biggest project,” he added.

Last year, Grizu-263 participated in the same contest with a different task.

“Our main goal was to have sustainability in success. The second place we achieved for the second time showed that our success was not a coincidence,” said Dursun.

The team completed the 2020 CanSat Competition but placed fourth.

In addition to CanSat, the team created a unit with some members for Teknofest Turksat Model Satellite Competition in Turkey.

“We completed seven stages of the competition under the mission created by Turksat engineers and came first in Turkey. We received our reward at Teknofest from President Recep Tayyip Erdogan,” said Dursun.

“With these four ranks in three years, we have proven our sustainable success mission,” he added.

Dursun recommended all space technology enthusiasts who are willing to work in this field “to be process-oriented, not result-oriented.”

“Regardless of the outcome, the work they do will shape their future. Therefore, to realize their dreams, they have to continue their work without giving up,” he added.

“Meantime, we always felt the support of our state, especially our university, financially and morally. In return for this support, we will continue to proudly represent our country in the international arena in space technologies and gain new successes,” he said.

June 26, 2020
We use cookies to ensure that we give you the best experience on our website. If you continue to use this site we will assume that you are happy with it.Ok