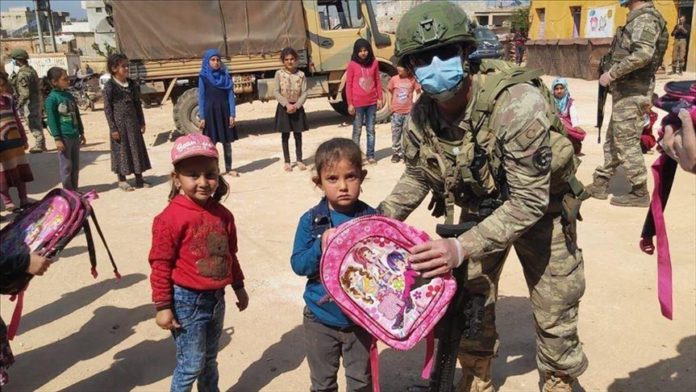 Turkey continues to look after weary families in the district which was cleared of YPG/PKK terror elements following the country’s anti-terror operations.

Mehmet Ali Parlak, the representative of Infak Association in Turkey’s southeastern Sanliurfa province — which sponsored aid items for Syrians — said a total of 308 families benefited from the charity activities.

In order to boost the peace and security of the district, many facilities such as schools and mosques are built with the help of Turkey’s armed forces and Turkish NGOs, which also distribute aid materials to people of the war-weary region.

In its more than 30-year terror campaign against Turkey, the PKK — listed as a terrorist organization by Turkey, the US, and EU — has been responsible for the deaths of nearly 40,000 people, including women, children, and infants. The YPG is the PKK’s Syrian offshoot.