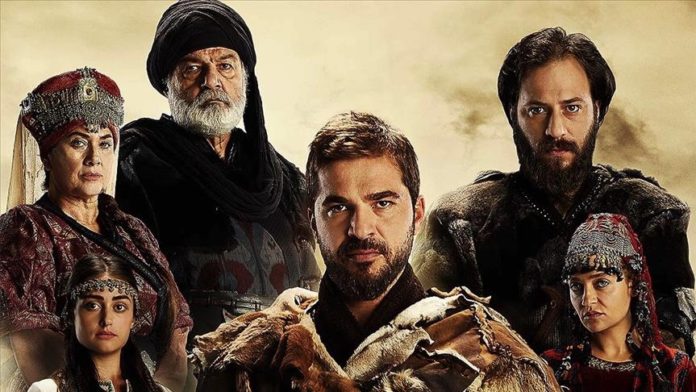 Like in other parts of the world, the Turkish mega-series Dirilis Ertugrul is taking Bangladesh by storm, with hundreds of people even in remote areas getting hooked to it.

“People are rushing to my shop to get the series in their mobile memory cards instead of demanding songs or other things,” Farhad Hossain, a mobile service shop owner in the southern coastal district of Barguna, told Anadolu Agency.

For Oliur Rahman Oli, a movie freak and an intermediate student of a private college in Bangladesh’s capital Dhaka, watching the Turkish serial in Bengali language dubbing is an essential routine. A local private TV network was airing the serial with Bengali dubbing over the past year.

“It was out of my imagination that how a series can be so interesting with great moral lessons and historical background,” said Oli.

After watching seasons one and two, he was impatiently awaiting the TV channel to start airing the rest of the three seasons of the mega-series.

“But it was not possible to keep patience for me to wait. I have enjoyed all episodes of the series through social media platforms, sometimes with Bengali subtitles and sometimes with English subtitles,” he added.

When he visited his relatives in the country’s southern remote area to celebrate Eid al-Adha last year, he carried some episodes of Dirilis Ertugrul in a pen drive.

He gave them to Hossain, who downloaded them in mobile memory cards of customers. It spread in the region like a wildfire, with people lining up at his shop, demanding the Turkish series.

Through different mediums, millions of people from all walks of life are hooked to the Dirilis Ertugrul and appreciating the Turkish history and artistic creativity of the serial.

“I have enjoyed all episodes of Ertugrul with my family members including my two kids and now I am enjoying Kurulus Osman,” said Bangladeshi senior journalist Morshed Alam.

Referring to his long career as a television journalist, Alam said while he has enjoyed many international standard movies and series, the Dirilis Ertugrul is the best.

“Those who wish to make quality movies in terms of developing themes, visuals, dialogues, and other technical materials should learn many lessons from this Turkish series,” he said.

He said while in most of the movies, narrative parts are boring, in the Turkish serial they are even more attractive. He was particularly referring to dialogues between Ertugrul and Ibn al-Arabi.

“How a man should be energized in the most critical moments in domestic life, social life and political life can be found in talks between Ertugrul and Arabi,” he said.

Speaking to Anadolu Agency, Md. Shah Alam, a teacher at a private university in the country’s southwestern district of Khulna, said this Turkish series has lessons for all aspects of life.

“The series teaches how a man can be best in his family as well as in the society and the state,” he said.

He added that the serial also teaches, “how a Muslim should be a good Muslim, a talented Muslim and a revolutionary Muslim”.

“The Turkish series like Dirilis Ertugrul, Kurulus Osman, Uyanis Buyuk Selcuklu, and Yunus Emre should be enjoyed from children to aged people, from ordinary to highly educated people. I am sure all will get pleasure in enjoying those,” he said.

Turkish Ambassador in Bangladesh Mustafa Osman Turan said that the Turkish TV serials are playing a significant role as a bridge between the people of two fraternal countries.

“People of Bangladesh come to know about the history, culture, and norms of Turkey through these mega serials and thus a cultural bondage is being developed between the people of the two Muslim countries,” he added.

On Tuesday, he visited Bangladesh’s popular private TV channel, Deepto [Enlightened], to exchange views with the management of the channel about the prospects of Turkish TV serials in the country.

Currently, the television channel is airing three Turkish mega serials and the channel. To date, it has aired eight Turkish serials.

“We have a tremendous response from Bangladeshi viewers about Turkish serials in terms of themes, story-making, and other quality works,” Chief Executive Officer of Deepto TV Fuad Chowdhury told Anadolu Agency.

“It is tougher to compete with the western and Indian films and serials for the limited budget local products. Turkish TV serials have become the best alternative for the first time in Bangladesh,” he said.

He informed the Turkish envoy that his channel airs Turkish serials for five hours.

“It is obviously a record that the screen of a private television channel of a country remains engaged with programs of another country,” he said.

Citing the enthusiasm Bangladeshi people have shown for the historical Turkish series, Chowdhury said they have planned to purchase the full episodes of Dirilis Ertugrul soon for Bangladeshi viewers in the Bengali language dubbing.

“I am really impressed that here I meet some persons who have learned the Turkish language on their own and are now working at a professional private television channel as translators of Turkish series, “he added.