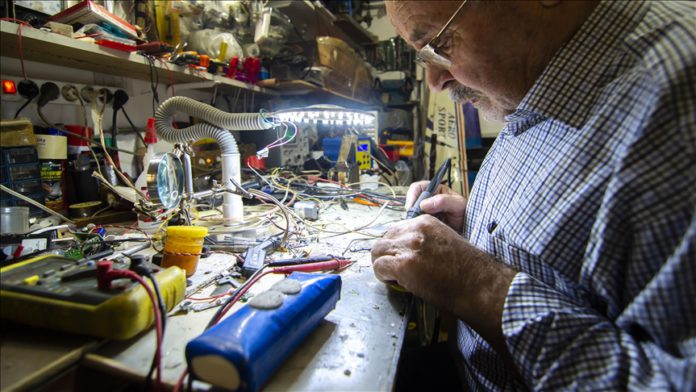 Hasan Huseyin Cirak in the central Turkish province of Konya turned a room at his home into a workshop for his passion for model aircraft.

Cirak,73, told Anadolu Agency that he developed in electronics and mechanics with books, magazines and articles, and makes model aircraft with the engineering knowledge he gained.

He used to try to make everything he wanted in his childhood because of financial difficulties. After realizing that he had good hand skills, Cirak became interested in electronics and mechanics.

While in secondary school, he made his first model aircraft with his own means after seeing rubber-powered airplanes of the Turkish Aeronautical Association in the sky.

He secretly made planes in the basement of his house away from his father, who would get angry that he would neglect school.

Cirak set aside his passion for a while after his father broke the planes.

Later, during his military service, Cirak’s interest was revived when he saw a model aircraft.

He wanted to be an electronics engineer but studied agriculture engineering due to low entry grades and family’s lack of support.

But he could not stay away from his planes and longed for them when he was apart.

“This is a disease for me. When I come to Konya [town] from the village, I immediately took a look at my planes. So this is a passion for us,” he said.

Noting that he loves each of his planes very much, he said, “I have 17 planes. Each plane has an adventure in me.”

Emphasizing that his passion and excitement continue like the first day, despite his age, he continued: “If they tell me ‘there is such an aircraft model, it has such a feature’ or if I see it somewhere, I immediately start to think: Should I do it, too?,’” he said. “I have sickness named loving of aircraft.”