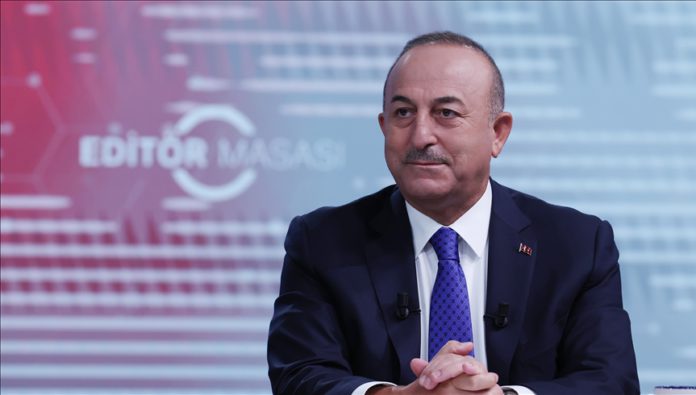 With aims to discuss establishing a security corridor, Russia’s top diplomat and a military delegation will arrive in Türkiye on June 8, according to the Turkish foreign minister on Tuesday.

Speaking at Anadolu Agency’s Editor’s Desk at the agency’s headquarters in the capital Ankara, Mevlut Cavusoglu said that Russian Foreign Minister Sergey Lavrov will be visiting Türkiye with a military delegation on June 8.

Cavusoglu said that a humanitarian corridor for vessels carrying food will be among the topics to be discussed during Lavrov’s visit to Türkiye.

Expressing disapproval over the sanctions against Russia, Cavusoglu stated they will not allow the sanctions to be bypassed via Türkiye and maintain this stance.

He also addressed the obstacles ahead of vessels carrying grains from the war zone and emphasized Türkiye’s efforts to aid confidence-building measures between Russia and Ukraine.

Noting one of the obstacles as sea mines planted in the Odesa region by Ukraine, Cavusoglu said the other obstacle is the sanctions imposed on Russia regarding insurance and the issue of not providing services in international ports.

Cavusoglu said the mines could technically be swept within 1-2 weeks, as he added that a control mechanism must be established to address the concerns of Russia and Ukraine.

He said Türkiye and the UN are also working together on the matter, adding that “The UN has a proposal. Creating a four-way contact group consisting of the UN, Türkiye, Russia and Ukraine. We said ‘yes’ to this in principle. An idea to hold a meeting on a technical level came up. A full consensus has not yet been reached on this issue.”

Saying that the Russian minister will come with a military delegation, Cavusoglu said, “We will sit down with our Ministry of National Defense, our soldiers and relevant units and discuss the issues at a technical level that needs to be done for the formation of this safe corridor and the passage of vessels.”

Turkish minister stated that they will host their counterparts from various countries in Türkiye this week and the next, as he stressed that they are completely focused on establishing such a corridor upon the orders of the Turkish president.

“We will focus day and night on what needs to be done to open this corridor. This is the most important and priority issue. If this is resolved, an important confidence-building step will be taken between the two countries (Russia and Ukraine),” he added.

Western and Russian officials are warning of the global food crisis due to the war in Ukraine and sanctions.

Russia and Ukraine, as significant major grain exporters globally, had a share of approximately 30% in world wheat exports last year.

Russian President Vladimir Putin has said that Russia is ready for unhindered grain exports, including the export of Ukrainian grain from Black Sea ports, but this requires the lifting of relevant sanctions against Russia.

According to UN estimates, at least 4,074 civilians have been killed and 4,826 others injured in Ukraine since the war began on Feb. 24. The true toll is believed to be much higher.

According to the UN refugee agency, over 6.7 million people have fled to other countries, while more than 7.7 million have been internally displaced.

NATO doing more that it has for decades: Stoltenberg