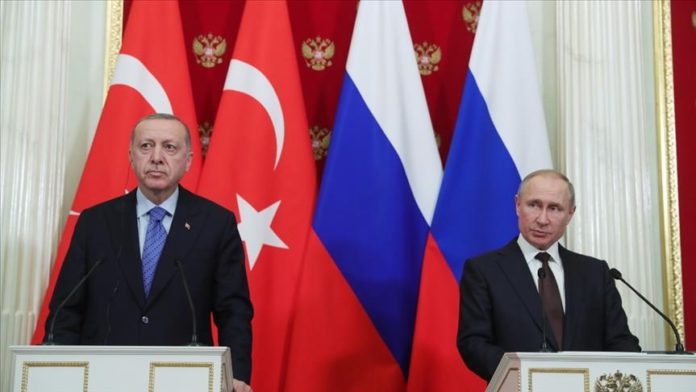 The summit between Russia, Azerbaijan, and Armenia was held on Monday.

Meeting two months after a cease-fire was declared for the Nagorno Karabakh region, the leaders of Russia, Azerbaijan and Armenia signed a pact at the summit to develop economic ties and infrastructure to benefit the entire region.

According to a statement from the Kremlin, the trilateral talks confirmed Azerbaijan’s position on normalizing ties and readiness for practical steps to restore peace.

“Taking into account the general stabilization of the situation around Nagorno Karabakh, it was possible to agree on a number of important steps in this direction,” said the Kremlin.

For his part, Erdogan voiced support for Russia’s efforts on solving the Nagorno Karabakh issue and spoke in favor of continuing to coordinate the joint actions, including the economic development of the region and the promotion of mutually beneficial projects, said the Kremlin.

Putin and Erdogan discussed the formation of the Turkish-Russian Ceasefire Monitoring Center and all military actions in Nagorno Karabakh.

The two leaders also discussed bilateral issues such as trade volume between the two countries, expanding cooperation in key areas, as well as combating the coronavirus pandemic, including the implementation of plans for the joint production and use of vaccines, said the Kremlin.

Relations between the former Soviet republics of Armenia and Azerbaijan have been tense since 1991, when the Armenian military occupied Upper Karabakh, also known as Nagorno Karabakh, internationally recognized as an Azerbaijani territory, and seven adjacent regions.

During the six-week-long conflict, Azerbaijan liberated several cities and nearly 300 settlements and villages, while at least 2,802 of its soldiers were martyred. There are differing claims about the number of casualties on the Armenian side, which sources and officials say could be up to 5,000.

The two countries signed a Russian-brokered agreement on Nov. 10, 2020 to end the fighting and work toward a comprehensive resolution.