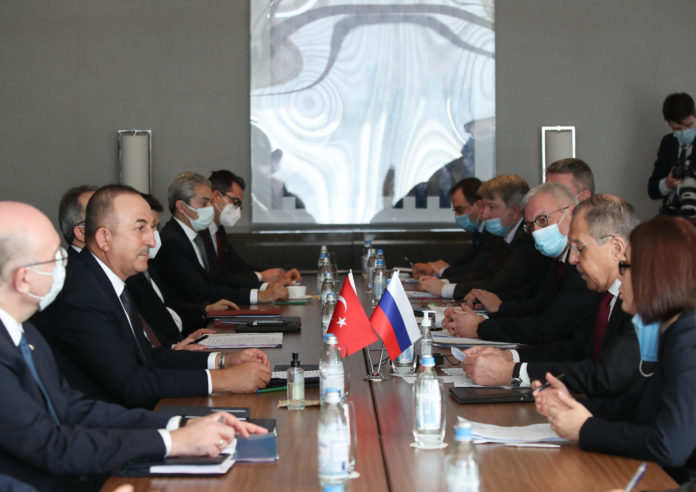 The top Turkish and Russian diplomats met Tuesday to discuss international issues and help prepare for a meeting of the two countries’ presidents.

Mevlut Cavusoglu, Turkey’s foreign minister, met with his Russia counterparty Sergey Lavrov in the Russian resort city of Sochi, ahead of a planned meeting of the High-Level Russian-Turkish Cooperation Council, set to be co-chaired by their presidents.

Lavrov stressed that despite the coronavirus pandemic, Turkish President Recep Tayyip Erdogan and his Russian counterpart Vladimir Putin remain in close contact – this year they met in person three times, took part in a videoconference in the Astana format, and had nearly two dozen phone conversations.

“This statistic alone shows what a rich agenda fills our relations,” said Lavrov.

He added that apart from preparing for the presidential meeting, he would like to discuss the state of affairs in the Black Sea, Middle East, and the Caucasus regions.

“We have a rich international agenda, the Syrian settlement, Libya, other parts of the Middle East region, and Nagorno-Karabakh topic that recently came forward,” said Lavrov.

“We greatly value our trustful dialogue,” he added.

For his part, Cavusoglu stressed that the close dialogue between the Turkish and Russian presidents, and the mutual trust between them, serves not only the development of bilateral relations but also regional ties.

Cavusoglu said he regretted that the pandemic kept the two countries from a full-fledged celebration of the 100th anniversary of their bilateral relations, but added he was satisfied to end the year with a personal meeting.

2 missing after car swept away by flood in Turkey

US sanctions 7 people, 2 entities linked to Myanmar military on...