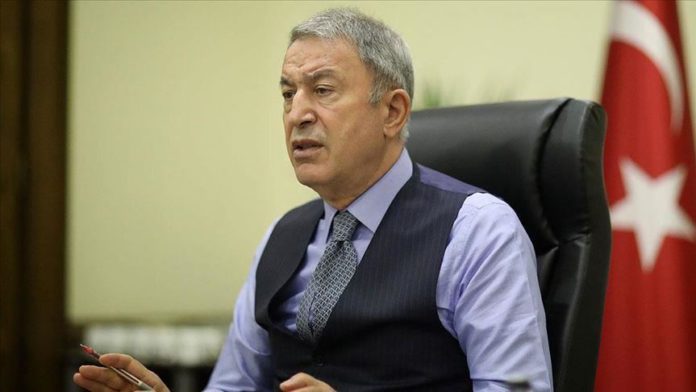 Turkish and Russian military delegations held technical meetings on Tuesday to discuss ongoing work regarding the cease-fire in Upper Karabakh.

He presided over the video conference with the Defense Security Cooperation and Training Aid Advisory Command in Libya, the head of the Turkish Military Delegation Committee at NATO Headquarters, the Cyprus Turkish Peace Forces Commander in the Turkish Republic of Northern Cyprus (TRNC), and the air force and navy commanders.

Akar said work between Turkey and Russia is ongoing since they signed a memorandum to jointly monitor the Nagorno-Karabakh truce.

He condemned Armenian forces for burning down houses and forests while withdrawing from occupied Azerbaijani territories.

‘Cyprus a national cause for Turkey’

Akar said all efforts must be made to ensure the safety of the TRNC so that it can develop and prosper.

“Our position on this issue is clear; Cyprus is a national cause for Turkey,” he asserted.

The minister said he wishes for a permanent solution through peaceful and political means.

In the meantime, he added, the Greeks should give up their irreconcilable attitude and the presence of Turkish people, their sovereignty, and equal rights should be accepted.

On Turkey’s exploration in the Eastern Mediterranean, Akar said technical and scientific studies were ongoing and the Turkish Armed Forces would ensure the safety of Turkish ships and protect the interests of the country and its people.

Turkey made no concessions at NATO summit: Top diplomat