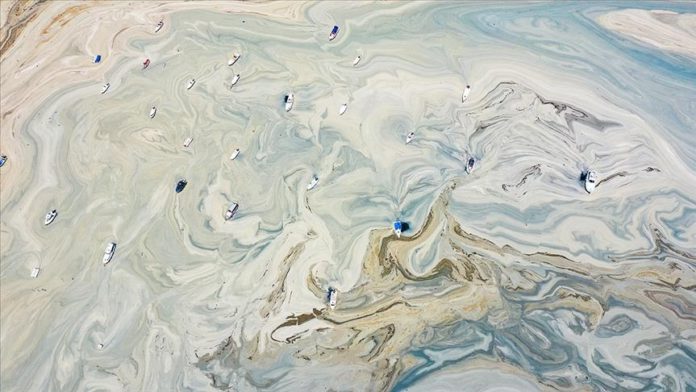 The mucilage outbreak that started to intensify in the Sea of Marmara since the beginning of June caused concern in other coastal regions of Turkey.

Authorities recently took action against the slimy substance, also known as sea snot, that has formed in the waterbody in northwestern Turkey.

Most recently, officials in the Aegean resort town of Bodrum began running tests in the waters off its coasts further south out of concern of the possible spread of the mucilage.

Reports have emerged in recent days of mucilage piling up further along Turkey’s northwestern coasts off Tekirdag and Canakkale provinces due to a strong southwesterly wind in the Sea of Marmara.

“We took a total of 18 liters (4.8 gallons) of seawater samples from the bottom and middle water, as well as the sea surface in different parts of Bodrum due to the scenes in the Sea of ​​Marmara,” Bodrum Mayor Ahmet Aras, told Anadolu Agency.

The situation in the Sea of Marmara and, most recently, the spread of mucilage to its Aegean Sea exit, the Canakkale Strait, has stirred the Bodrum Municipality, Aras said: “The samples taken from the sea by our cleaning services directorate were sent to Mugla Sitki Kocma University to be analyzed with all the chemical and microbiological tests.”

Emphasizing that “with no nature, there’s no tourism,” the mayor of the seaside town in the province of Mugla noted that if needed, a diverse panel would be held to assess the situation and organize mass prevention efforts.

He pointed out that Bodrum’s inhabitants boomed during the pandemic, with the population tripling over the last year. “That comes with some infrastructure problems. We’ll have completed the works on Bodrum’s infrastructure within a year or two with the support of both the Mugla Metropolitan Municipality and the Culture and Tourism Ministry.”

He also said that extensive analysis, including on issues such as pedestrianization, bike lanes, and public transport, was currently underway to solve Bodrum’s traffic problem.

Aras also said that with the town’s unique architecture and marine attractions, Bodrum hopes to entice people to lead a digital nomadic lifestyle.

Digital nomads are remote workers who travel to various locations regularly and use modern technology to work from coffee shops, hotels, co-working spaces, sailboats, or libraries with a WiFi-connected laptop or smartphone from anywhere in the world.

“There are generally single or two-story buildings in Bodrum that provide extra advantages such as your own garden and terrace. Especially after COVID-19, this gave Bodrum a great advantage in terms of personal space.”

Wooden boats can also anchor in the bays of Bodrum, Aras said, adding that these rustic vessels also provided all manner of technological comforts.

“You can launch a startup here. Think of it as a floating silicon valley,” he said.

According to Aras, tourism has also changed as a concept, now going hand-in-hand with local culture, gastronomy, and the environment.

Travel restrictions on Turkey, imposed by various countries such as the UK due to the COVID-19 pandemic, are also likely to be lifted next month, Aras said, citing the success of the country’s mass vaccination campaign.​​​​​​​