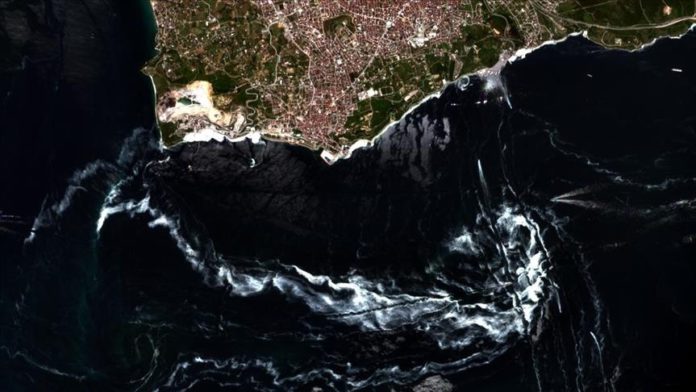 Amid a recent rise in mucilage lining parts of Turkey’s northwestern coast, a satellite earth station based in the metropolis Istanbul has taken images of the phenomenon, also known as “sea snot.”

The Satellite Communication and Remote Sensing Application and Research Center (UHUZAM) — the first of its kind in Turkey — viewed the mucilage in the Sea of Marmara through the Pleiades and Spot 5, 6 and 7 satellites, detecting the areas covered by the thick, mucus-like slimy layer containing a variety of microorganisms.

The satellite images by the center that operates under Istanbul Technical University (ITU) also showed that the amount of mucilage in the sea had more than tripled in 10 days.

Images taken on May 14 detected mucilage covering an area of ​​25 square kilometers (over nine square miles), while later photos taken on May 19 indicated an expansion to 58 square km and to 85 square km as of May 24 hugging the eastern coast of the Sea of ​​Marmara, from the Kapidag Peninsula to the Gulf of Izmit.

They showed that the mucilage was mostly around the Gulf of Izmit and its surroundings, the Anatolian coast of the Bosphorus Strait through Istanbul, and the nearby Princes’ Islands.

The images by UHUZAM have been cited in field research by scholars and students, said the center’s director Mustafa Yanalak, who also heads the university’s geomatics engineering department.

“We conducted a study on the examination of mucilage in the Sea of ​​Marmara. We present this information to the use of relevant institutions,” he said, speaking to Anadolu Agency.

UHUZAM’s Deputy Director Nebiye Musaoglu said the center also worked on different areas of application, but that their focus had recently shifted due to the mucilage problem in the Sea of Marmara.

Underlining that work has been ongoing since March, Musaoglu said: “Using optical satellite images in the Marmara Region, we took images on cloudless days in temporal terms.”

She stressed that the satellite images had determined the location and distribution of the mucilage, adding: “These satellite images we’ve taken are very important for detecting mucilage and taking action on the spot.”

Mucilage is an overgrowth of microscopic algae called phytoplankton and is caused by rising seawater temperatures due to global warming, stagnant water, and pollution.

Turkish authorities have recently announced a 22-point action plan to clear the recent surge in the substance. The plan will be jointly carried out by the Environment and Urbanization Ministry, Transportation and Infrastructure Ministry and Agriculture and Forestry Ministry.

The health and interior ministries, among other bodies, as well as non-governmental organizations and coastal municipalities under the coordination of governorships are also taking part in the plan.