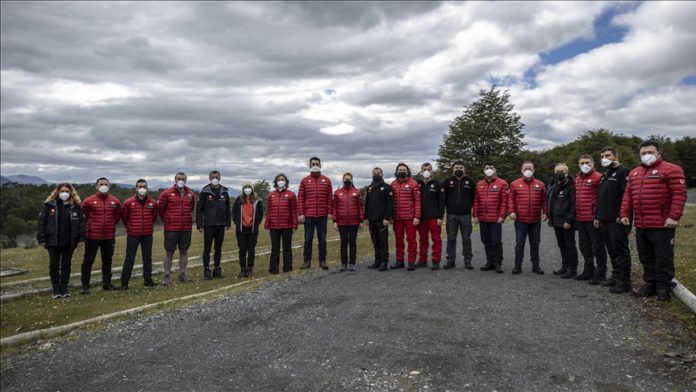 After leaving Istanbul late last month to do scientific research as part of the country’s 6th Antarctic expedition, a Turkish research team set foot in the world’s coldest continent on Wednesday.

The journey, which took nearly three weeks, including a seven-day quarantine in Puerto Williams, Chile, started on Jan. 21 in Istanbul, Turkiye, a city with a population of 15.5 million.

After a seven-day quarantine in Chile to protect against COVID-19, the expedition team arrived at the bottom of the world, Antarctica’s King George Island, after a two-hour flight.

On the way to Antarctica, two foreign scientists also joined the team to carry out their projects as part of cooperation with Portugal and Bulgaria.

“The difference in this year’s expedition is our doing it within the framework of COVID-19 measures. We delivered our expedition team to Antarctica without any glitches thanks to the quarantine process,” said Burcu Ozsoy, the director of TUBITAK’s Marmara Research Center Polar Research Institute.

“With national equipment from Turkish defense companies Aselsan, Havelsan, and Tubitak’s Defense Industry Research and Development Institute (SAGE), we’ll do the work while both ensuring the health and safety for our journey, and at the same time testing this equipment,” she added.

Ozgun Oktar, assistant expedition leader responsible for logistics, said now is the time to start the fieldwork the team has been preparing for an entire year. “Our ship’s supplies are now complete. After that, we’ll set sail for a five-day challenging trip,” he said.

“We’ll see many scientific bases en route, but unfortunately we won’t visit any of them this year due to the pandemic,” he added.

The 20-member team and 30-person ship’s crew will be isolated on the ship for the next month and start its scientific activities in its temporary science camp on Horseshoe Island, he said.

Hasan Hakan Yavasoglu, the assistant expedition leader, said a total of 14 scientific projects will be carried out in life sciences, earth sciences, and physical sciences, with 29 institutions as stakeholders,

“Over the last five years, 86 publications and dozens of scientific books and theses have been produced from the scientific studies carried out on the Antarctic continent,” he said.

“This year, we will be in the field with projects that will contribute to the national and international literature.”