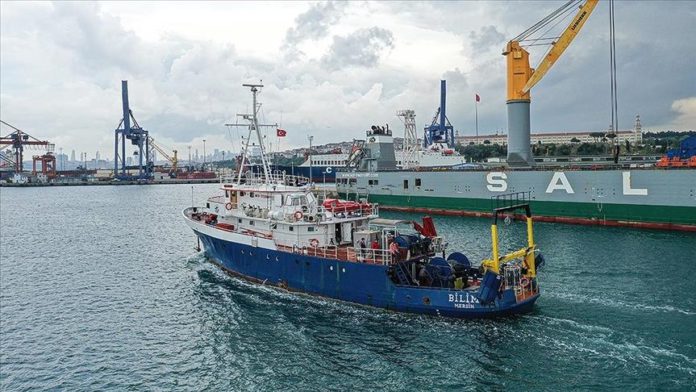 A research ship by the Middle East Technical University (METU) is investigating the causes of pollution and “sea snot,” or mucilage formation, in the Marmara Sea.

The Bilim-2 (Science-2) vessel collects data from 100 stations in the Marmara as part of the “Marmara Sea Integrated Modeling System (MARMOD) Project” which has been conducted since 2017 by the Ministry of Environment and Urbanization, under the coordination of METU Marine Sciences Institute.

Samples taken by the water measuring device from 100 different stations, including the Istanbul and Çanakkale straits, are analyzed in the laboratory of the Bilim-2 ship.

On recent “sea snots” in the Marmara, Salihoglu said “climate change and overfishing” are among the factors that trigger the problem.

“It is necessary to study the Sea of Marmara with all its parameters. Otherwise, you will not be able to analyze problems like mucilage correctly,” he said.

Research is mainly focused on current factors such as the decline of oxygen and salt that affect sea snots in the Marmara and Salihoglu said it would take at least six to seven years to see an improvement if precautions are taken as soon as possible.

“A very quick recovery is not easy, it takes time and patience,” he said.

Salihoglu said researchers will present concrete results by June 4 to the Ministry of Environment.

Underlining that “human pressure” similar to the Marmara also exists in the Black Sea and the Mediterranean, he said the difference in the Marmara is that “it is a closed sea.”

But he warned against similar threats, such as the decline in oxygen and overfishing in the Mediterranean and the Black Sea.

Scientific Expeditions Coordinator Hasan Orek said the aim of the expedition, which was planned a year ago, was to look at how the ecosystem of the Marmara developed before summer.

“We developed our station network due to the mucilage,” he said.

Orek said some basic water physical parameters are measured, including oxygen, salinity, temperature, density as well as the amount of chlorophyll on the surface and the temperature.

But he said it is hard to tell the amount of pollution in the Marmara at the moment, and added: “there is mucilage in the entire water column.”

“There are serious signals about the health of the ecosystem. It will not improve immediately after measures are taken but we think that we can solve it in the long term with determined steps,” he said.