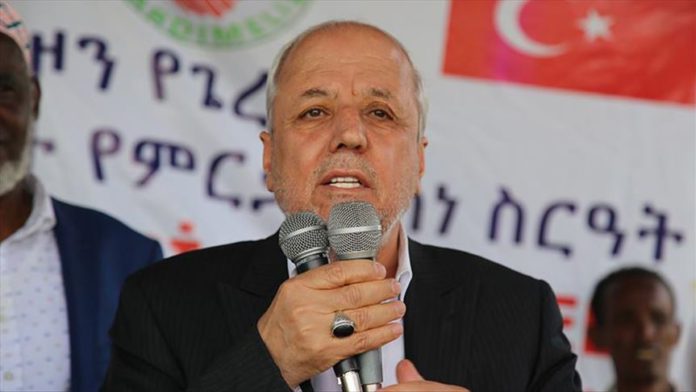 Turkey’s charity association will help nearly 1 million underprivileged residents in 26 countries, many under lockdown, during the Muslim Eid al-Adha celebrations set to begin on July 31.

The Feast of the Sacrifice festival will be celebrated July 31 to Aug. 3 in Turkey.

The Yardimeli International Humanitarian Aid Agency will help the needy ahead of the holiday.

The head of organization’s board Sadik Danisman told Anadolu Agency the group is making efforts to reach 700,000 across the globe.

The animal slaughter and distribution of meat will be carried out in 53 different regions in 26 countries, he said.

“We went through a different preparation process for Eid al-Adha this year compared to previous years due to the [coronavirus] pandemic,” said Danisman.

Eid al-Adha works will be carried out in Africa, Asia, the Middle East, Balkans and Turkey, as well as in the Caucasus region.

“We had to revise our plans, which were prepared months ago for the aid organization. We canceled plans to slaughter and distribute animals in the regions that may pose risks as a part of the health care measures,” he said.

Danisman stressed it will be possible to identify a rise or drop in donations more clearly in coming days but the prediction is that there will be an increase as preparations continue.

The number of donations will increase this year because mass animal slaughter is not allowed in Turkey, he said. “Since the animal slaughtering is forbidden to be carried out in masses due to the pandemic, we estimate that the donors will fulfill their Eid obligations through donations to charities.”

The Turkish nation’s strongest side in difficult times is cooperation and sharing awareness, Danisman said, and even those who were in good financial shape also faced difficulties during the pandemic. “We managed to keep up by supporting each other,” he said.

A number of Western societies were in desperation during the pandemic and did not have a similar consciousness, according to Danisman. “Unlike some Western societies, our nation had overcome these difficulties with the spirit of solidarity and awareness of sharing.”

The charity’s first priority during the pandemic was unemployed people and day laborers.

During the holy Muslim fasting month of Ramadan — which was also observed during the pandemic lockdown — the charity delivered 6.5 million Turkish liras ($950,000) in cash to the unemployed in Turkey and abroad.

Of course, the priority during Eid al-Adha will be orphans, needy, disabled and those who lost jobs, he said. “All our teams are already preparing distribution lists. They are visiting families directly to determine their needs.”

Action plans are being developed to prevent groups that will create crowds and congestion on the day of distribution.

The Holiday Dress for Orphans gift campaign, which is held every holiday, “continue at full speed” to make the orphans happy, said Danisman. “The orphans are brought to shops in small groups, where they choose their own festive clothing to be bought.”

The group’s “One Sacrifice equals One Sapling” project that has been going on for three years will also be observed.

Fruit tree saplings are planted in Turkey and abroad, taking into account planting time, soil structure and climate conditions, for each sacrificed animal donated to the Yardimeli Association, he said.