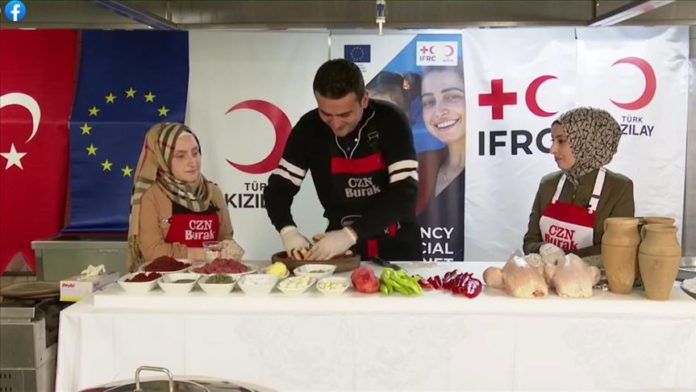 The Turkish Red Crescent on Friday celebrated World Food Day with a celebrity chef and two Syrian refugees by cooking a traditional meal in both Syrian and Turkish cuisine.

Organized by the Turkish Red Crescent and the International Federation of the Red Cross and Red Crescent (IFRC), the event was live broadcast in Turkish, English and Arabic on social media.

Burak Ozdemir, also know as CZNBurak, is a celebrity chef with over 17 million followers on Instagram and a restaurant owner with several branches in Istanbul.

Two Syrian refugees Amal Awat, 29, and Rayan Atr, 18, both living in Istanbul, joined Ozdemir, who is from Turkey’s southeastern province of Hatay on the Syrian border, to prepare the traditional testi kebab, a dish prepared in an earthenware-jug known both to Turkey and Syria.

The event was hosted at a soup kitchen serving 1,000 people daily and run by the Turkish Red Crescent in Istanbul’s working-class Pendik district.

It aimed to showcase “how food connects us in Turkey — no matter where we come from, the language we speak, food is a common experience,” according to the charity organization.

It was part of the visibility efforts of the Emergency Social Safety Net (ESSN), the largest humanitarian cash program in the world, and the largest program in EU’s history, the Turkish aid agency said.

Every year on Oct. 16, the UN’s Food and Agriculture Organisation (FAO) celebrates World Food Day, which marks its foundation in 1945, and later turned into a global event creating awareness on food shortages across the globe.