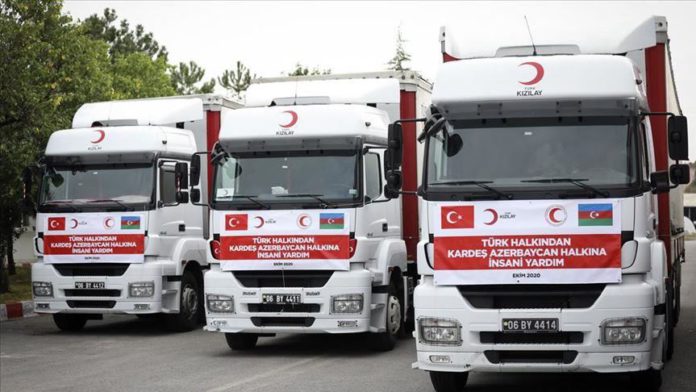 The Turkish Red Crescent (Kizilay) has started the distribution of humanitarian aid in the Azerbaijani city of Fizuli on Friday.

Kaan Saner, director of the Turkish Red Crescent’s International Policies and Partnerships, told Anadolu Agency that they started to distribute aid in cities close to the conflict zone after the call for emergency aid.

Earlier, the aid convoy of the Turkish Red Crescent carrying relief supplies to the Azerbaijani people, who have been affected by Armenian attacks, had arrived in the capital Baku.

Clashes between Azerbaijan and Armenia erupted on Sept. 27 and since then Armenia has continued attacks on civilians and Azerbaijani forces.

Armenia even launched a missile strike on Azerbaijan’s second-largest city, Ganja – an area far from the front line – on Sunday, killing at least 10 people and injuring 35, including women and children.