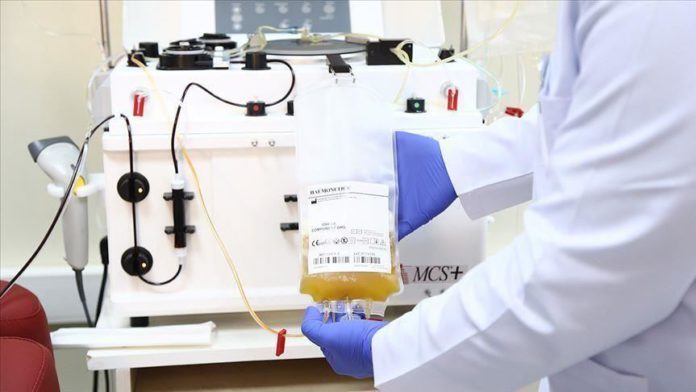 The Turkish Red Crescent collected 3,970 immune plasmas donated across the country amid the novel coronavirus outbreak, according to the group’s top official.

Kerem Kinik, head of the aid agency, told Anadolu Agency that the immune plasma therapy is considered as a supportive treatment for COVID-19, adding that the agency has taken steps along with the Health Ministry on this issue.

The first plasma, Kinik said, was donated on April 7, and some 3,500 Red Crescent employees worked in two shifts during this period in plasma apheresis centers in 14 cities to receive blood and plasma donations.

He recalled that the immune plasma treatment is a method that has been applied for many years.

Kinik said the antibodies formed in the blood of people who beat the disease are used to strengthen the immune system of patients.

During the outbreak, the agency contacted the individuals who had defeated the disease one by one and invited them for plasma donation based on the information received from the Health Ministry, he said.

Some 15,900 people who recovered from the disease were informed on plasma donations over the phone during this period, he said, adding that 4,236 them proved eligible for plasma donation after the tests.

“95% of them agreed to become voluntary plasma donors. So far, 1,275 people have donated plasma to the Turkish Red Crescent. In this process, some of our donors made more than one donation,” Kinik said.

He went on saying that in addition to the Turkish Red Crescent, 427 plasma donations were made in training and research hospitals, and around 1,000 immune plasma components were received there.

“Thus, so far 5,000 immune plasma components have been applied [in treatment] of COVID-19 patients.”

Kinik recalled that the first plasma is being taken from a patient 14 days after the person tests negative for the coronavirus and regains the health, and one-unit plasma, or 400 milliliters, are taken for a total of three weeks each.

He underlined that plasma given by a donor three times is used for the treatment of six patients.

The Turkish Red Crescent worked to meet the daily plasma needs during the pandemic, Kinik said, adding that the agency just started stocking up the plasma donations.

Since the virus emerged in China last December, it has spread to 188 countries and regions.

The global death toll from the novel coronavirus has exceeded 316,000, with more than 4.75 million confirmed cases, and recoveries topping 1.75 million, according to a running tally by the US’ Johns Hopkins University.

Turkey calls on Greece for dialogue on East Med