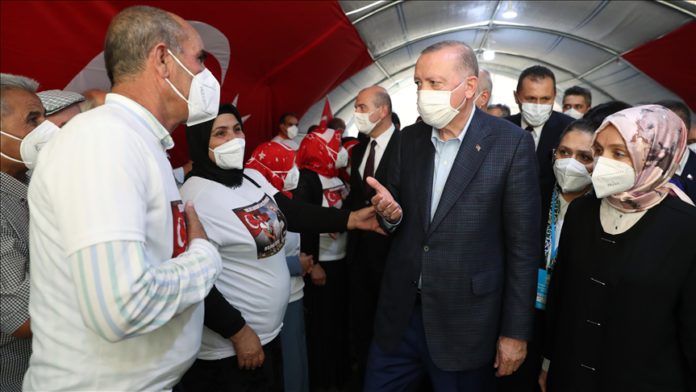 On Friday, Erdogan paid a visit to the protesting families and voiced support for their cause.

Aysegul Bicer, whose son Mustafa was abducted by the PKK terror group nearly three years ago, said that Erdogan has supported their struggle from day one.

”We are very happy with the visit of our president. We were strong, we become stronger … We call for unity and solidarity,” Bicer said.

”Our president said that the struggle of mothers is justified. We believe that together we will defeat the PKK and bring our sons down the mountains,” she went on to say.

Omer Tokay, a father whose child was abducted by the terror group at the age of 14, said that he has been participating in the sit-in for nearly two years.

Expressing his gratitude over the president’s visit to the protesting families, Tokay said that Erdogan has promised to the families that he will play his role to reunite them with their children.

Suleyman Aydin, another grieving father, said: “We will continue our protest with determination. The visit of our president gave us moral support.”​​​​​​​