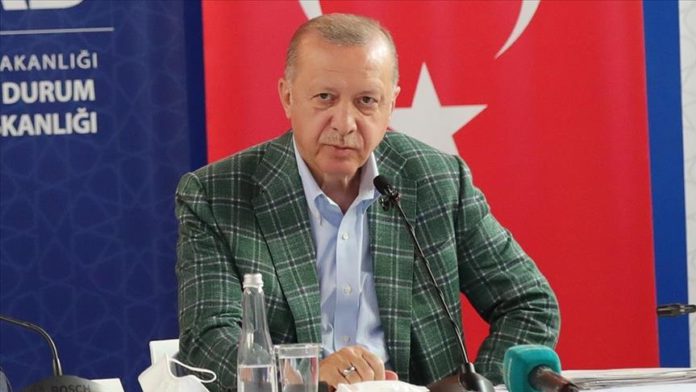 The Turkish president on Saturday visited areas affected by forest fires across southern Turkey, which have led to deaths and injuries besides vast material damage.

“Fifty million (Turkish) liras [$5.91million] have been released to meet the urgent needs in areas affected by the fires. Rental aid will also be provided to those whose houses have been burned and damaged,” Recep Tayyip Erdogan said while visiting the Manavgat district of Antalya province from a helicopter.

Damage to agriculture, livestock and greenhouse activities will be compensated and recovered, he added.

Underlining that interest-free loans to artisans and the support of Small and Medium Enterprises Development Organization of Turkey (KOSGEB) will be given in disaster-hit areas, he said the construction of houses will begin within a month.

He added that the houses will be rebuilt in line with the local architecture. “According to Article 169 of our Constitution, burned areas cannot be used for other purposes … It is our foremost duty to reforest every burned area.”

Drones have provided us with great opportunities for rapid detection of fires and controlling them before they grow, Erdogan said.

“According to evaluations by international organizations, we are in the first place among countries that respond to fires in the fastest and most effective way, and suffer the least damage,” he added.

The president urged people to be extra careful in order to protect forests, and not to light fires without precaution.

Immediate medical response was given to 334 people affected by fires, and almost all of them are discharged, he said.

Agriculture and Forestry Minister Bekir Pakdemirli briefed Erdogan on the ongoing efforts in the region.

Since July 28, as many as 98 forest fires have erupted in Turkey, with most of them being in southern regions. The Turkish authorities managed to control 88 of them, and six people lost their lives.

Pakdemirli said efforts are underway to control the remaining blazes.