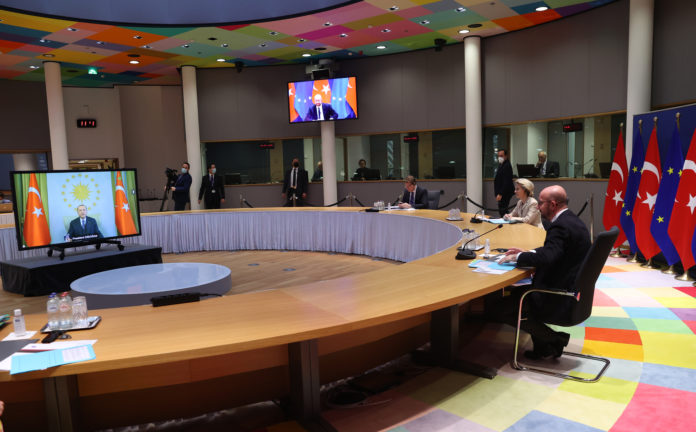 On Thursday, a top EU official told Anadolu Agency that at the meeting, top EU officials will seek to boost cooperation and develop a mutually beneficial relationship with Turkey, a candidate for membership in the bloc.

The negotiations will “focus on how to ensure stability in the Eastern Mediterranean and develop a cooperative and mutually beneficial relationship with Turkey,” said the EU official, who declined to be named.

The meeting came ahead of the EU leaders’ summit next week, when EU heads of state and government will discuss the future of the bloc’s relationship with Ankara, including the 2016 migration deal.

EU foreign policy chief Josep Borrell suggested on Monday that the deal to stop irregular flows of asylum seekers to Europe and improve the conditions of Syrian refugees in Turkey would be renewed “in some form.”

The pact “has been very much criticized, but it seems that this statement has produced tangible results. It has led to a significant decrease of loss of human lives, a reduction in irregular crossing, and improved the situation of refugees and migrants in Turkey,” he said.

But Ankara has frequently accused the EU of failing to deliver on its promises under the pact.

The bloc in December 2020 concluded the final contracts under the €6 billion ($7.3 billion) refugee support package.

But, the amount the EU actually spent for the needs of the Syrian refugees remains below €4.5 billion ($5.4 billion) as of March 2021, according to EU figures.

These steps were blocked by several member states due to bilateral problems and tensions in the Eastern Mediterranean.

Ankara says it has so far spent more than $40 billion from its own resources for the refugees, and underlines that the EU should do more to share the burden.