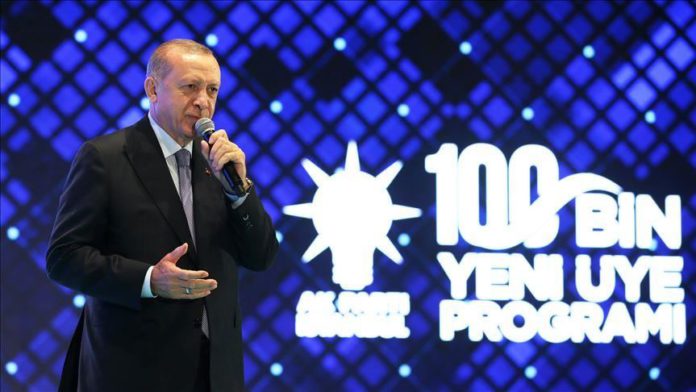 Turkey’s president said Saturday the ruling Justice and Development (AK) Party will continue its way to a stronger nation with new members.

Recep Tayyip Erdogan addressed supporters at a 100,000 new members program at the AK Party in Istanbul.

Erdogan said the party is one of the distinguished political movements in the world with more than 10.5 million members.

Drawing attention to new ways to reach potential members, he said it is unthinkable for politics to stay out of digital platforms in an era when everything is digitalized.

“We have established a system to receive member applications online,” he added.

Erdogan said the mobilization of new members brings a different dynamism and new excitement to the party’s organizations.

“I believe that by working much harder together we can reflect the decision of Instanbulites to the ballot box with record voting rates — first in 2023 and then in 2024. We will take the same result across Turkey,” he said.

Erdogan said the party will carry out its activities without excluding, breaking and upsetting anyone, as he stressed the importance of brotherhood.

He said there will always be a place in the party for all kinds of opinions that stay away from terrorism and violence, regardless of how contrary.

Erdogan said the destinies of the party and the country are integrated and if Turkey is standing strong and moving toward science, it means the AK Party is doing its job correctly.

“By Allah’s leave, we will never return from the road of service to the country and nation,” he said.

Turkey, Greece to meet for 'consultative talks' in March