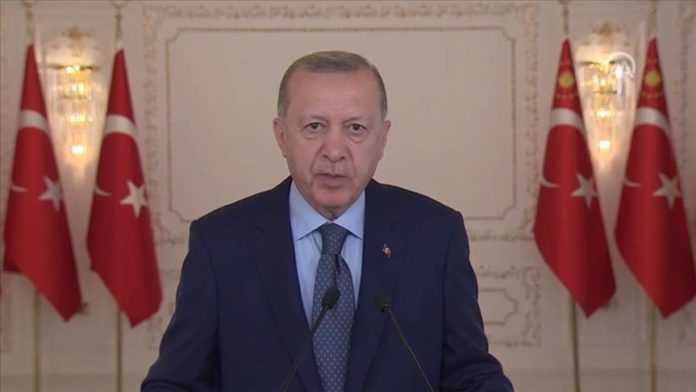 The Turkish president on Sunday commemorated the 26th anniversary of the Srebrenica genocide, voicing his sorrow and sympathy to the victims.

In a video message at the memorial ceremony to mark the massacre’s anniversary in Bosnia, Recep Tayyip Erdogan said Turkey will continue to stand with Bosnia and Herzegovina and Bosnians.

Turkey will never let the genocide, which is “a black mark in the history of Europe and humanity,” be forgotten, he added.

“The wounds Srebrenica opened in our hearts are still bleeding although 26 years have passed,” Erdogan said.

More than 8,000 Bosnian Muslims were killed when Bosnian Serb forces attacked Srebrenica in July 1995, despite the presence of Dutch peacekeeping troops.

The UN Security Council declared Srebrenica a “safe area” in the spring of 1993. But troops led by Gen. Mladic overran the UN zone. He was later found guilty of war crimes, crimes against humanity and genocide.

Recalling the court decree on the war criminal, Erdogan said although the decree cannot alleviate the sufferings of the “tragedy in the heart of Europe,” it can help prevent other genocides.

He underlined the significance of peace in Bosnia and Herzegovina, which harbors different beliefs, cultures and ethnicities, saying its stability is necessary for all of Europe, particularly the Balkans.

The Turkish president called on political figures to oppose hatred, violence and discrimination, and reunite based on common human values. “Making peace permanent on these lands [Bosnia and Herzegovina] is our common duty,” he said.

Erdogan also extended his condolences to the families of the genocide victims, and wished Allah’s mercy upon the deceased.