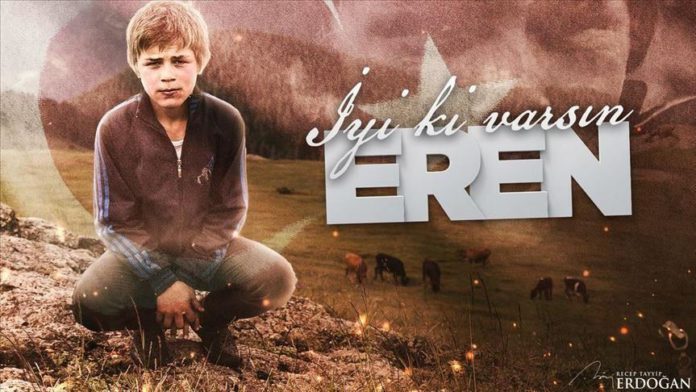 The Turkish president on Tuesday marked the third year upon the death of Eren Bulbul, a teenager martyred by the PKK terror group in the Black Sea province of Trabzon.

Recep Tayyip Erdogan said on Twitter that the pain of losing Bulbul is still fresh even though Turkey made terrorists pay for it.

“Together with Eren Bulbul, I remember all our martyrs who sacrificed their lives for the sake of this country without hesitation, with mercy and reverence,” he added.

On Aug. 11, 2017, 15-year-old Bulbul died from gunshot wounds he sustained in a PKK attack while showing gendarmerie forces a hideout of terrorists in Macka, a town 22 kilometers (14 miles) south of Trabzon.

Bulbul was killed by Mehmet Yakisir, codenamed Zeynel, who was on the most wanted red category of the Interior Ministry’s wanted terrorists list.

On July 15, 2018, the terrorist was neutralized by Turkish security forces.