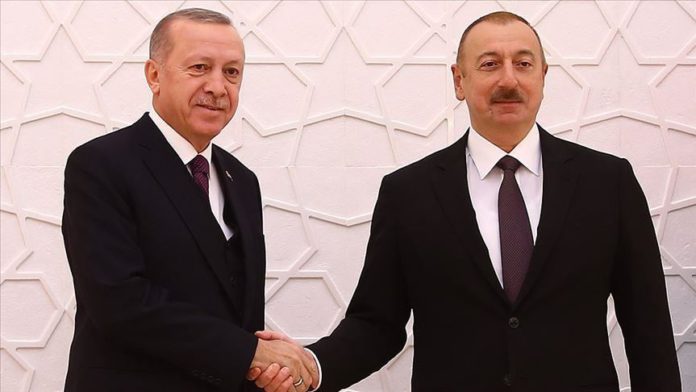 Turkey’s president on Tuesday congratulated the Azerbaijani leader and people on the 102nd anniversary of the capital Baku’s liberation from Armenian and Bolshevik occupation.

Over the phone with Azerbaijan’s President Ilham Aliyev, Recep Tayyip Erdogan underlined that the Caucasus Islamic Army under the leadership of Nuri Pasha (Killigil), who came to the aid of the brotherly Azerbaijan from Anatolia 102 years ago, signed a “historic victory shoulder to shoulder” with the Azerbaijani National Army, according to Turkey’s Communications Directorate.

Erdogan also commemorated all martyrs and heroes of the “glorious” fight.

As seen in Baku’s liberation, Turkey and Azerbaijan, in facing threats and attacks to their existence and vital interests, have shown unity and solidarity — an example and a message to the whole world — he added.

Reiterating the commitment to deepen and strengthen the cooperation of Turkey-Azerbaijan relations in all areas under the “two states, one nation” maxim, Erdogan said his country will always strongly support Azerbaijan.

He stressed that Turkey, just like Azerbaijan, has the same enthusiasm and pride on the occasion of Baku’s liberation.

On Sept. 15, 1918, an elite Ottoman force called the Caucasian Islamic Army under the leadership of the 29-year-old Nuri Pasha was sent by then-Minister of War Enver Pasha to what is today Azerbaijan in the closing months of World War I in response to a plea from the region’s people.

The Caucasian Islamic Army, made up of Azerbaijani and Turkish soldiers, completed its mission in September, liberating Baku and thus laying the groundwork for the country’s independence decades later in 1991.