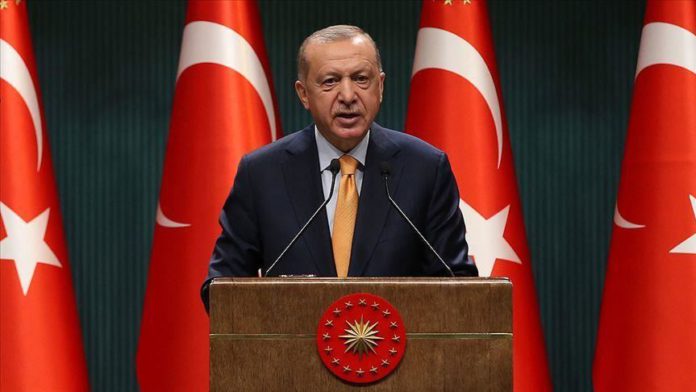 The Turkish president marked the 75th anniversary of the establishment of the United Nations on Saturday.

“Turkey is a strong supporter and advocate of the principle of multilateralism and the values represented by the UN, which is at the center of the rules-based global system,” Erdogan added.

Noting that Ambassador Volkan Bozkir serves as president of the UN General Assembly during this period of historic importance for the UN, he said: “The fact that a Turkish citizen presides, for the first time, over the UN General Assembly – where 193 member states have equal representation and which reflects the international community’s common will and conscience – is a manifestation of the international community’s support and confidence in our country.”

“Our country has been contributing personnel to UN peacekeeping operations since the Korean War and leading two important initiatives within the UN, namely the Alliance of Civilizations and Mediation for Peace,” he added.

The Turkish president also stressed the important aspect of our UN policy to ensure the implementation of the 2030 Sustainable Development Agenda: “In this respect, we co-chair the Group of Friends of the Least Developed Countries (LDCs), take responsibility in the Alliance for Poverty Eradication and host the Technology Bank for LDCs.

“We are one of the countries that contributed the most to the struggle of the LDCs, refugees and other vulnerable groups against Covid-19.”

“Since March, we responded to calls from 154 countries and 8 international organizations without making any discrimination on the basis of religion, language, and race whatsoever,” Erdogan added.

Stressing Turkey’s leading role in the fight against environmental issues, climate change, and biodiversity loss, Erdogan said: “With this understanding, we will host the 16th Conference of the Parties to the UN Convention on Biological Diversity.”

“As a country with a negligible historical responsibility for greenhouse gas emissions, we will continue our endeavors to reach the fair position we deserve under the UN Framework Convention on Climate Change,” he added.

Erdogan also said that as a result of its strong economic indicators, Turkey is among the 15 member States that contribute the most to the UN General Budget.

“Twenty-five different UN representations and offices operate in five provinces of Turkey. An important aspect of our UN policy is to make Istanbul, the crossroad of continents and civilizations, a regional hub of the UN. We continue our activities in line with this goal,” he said.

“Humanitarian diplomacy is a matter to which Turkey attributes priority and importance in the UN,” he said.

“Turkey, which hosted the first ever World Humanitarian Summit in 2016, is the most generous country in the world in terms of the ratio of its humanitarian aid to its national income.”

“In addition to the nearly four million people to whom we provide protection in our country, we continue our humanitarian assistance to civilians struggling for survival in crisis zones,” he added.

“In line with that, we contribute to the efforts to reform the UN system, especially the Security Council, with the principle of ‘The World is Bigger than Five’,” the Turkish president added.

“I extend my sincere congratulations on the 24 of October ‘United Nations Day’, believing that the UN will continue to contribute to international peace, stability, development, and justice,” he said.