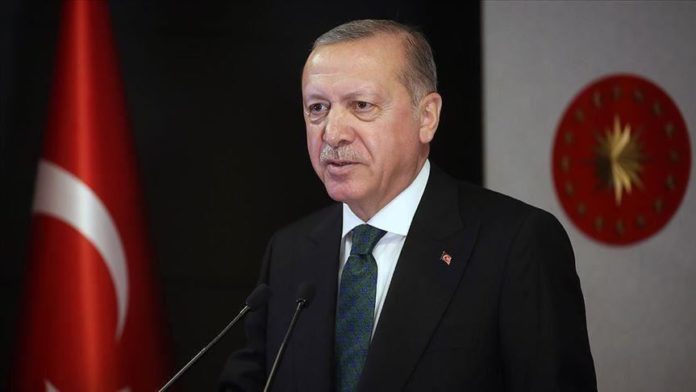 Pointing to how Turkish-Japanese diplomatic relations sprang from the aftermath of the tragic Sept. 16, 1890 shipwreck of the Ertugrul frigate, and Japan’s rescue efforts and the hospitality it showed the survivors, Erdogan said the date of Suga’s election is meaningful and significant for bilateral ties.

He said he hopes to carry the “deep-rooted friendship” forward based on a strategic partnership established in 2013.

The president praised Japan’s contributions to global peace and stability.

Both nations, Erdogan said, will guide the international community with their sincere joint efforts, and will work in close cooperation on bilateral, regional and global issues.

It has been 130 years since the Ertugrul frigate shipwreck in southeastern Japan, a heartbreaking incident considered the beginning of the Turkish-Japanese friendship.

In response to the visit of Prince Komatsu of Japan to Istanbul in October 1887, the Ertugrul was sent to Japan in July 1889.

Carrying 609 sailors, the ship left Japan on Sept. 15, 1890 but was caught in typhoons that affect the East Asian country every year.

It sank off the coast of Wakayama Prefecture on its way back home on Sept. 16, resulting in the loss of 533 Turkish sailors and officers, including Ottoman Rear Adm. Ali Osman Pasha.

Japan’s rescue efforts, and support shown to survivors, however, sealed the friendly ties between the people of both nations.

A monument for the martyrs was erected in 1891 in Kushimoto, where the accident took place. The tragic legacy is kept alive at memorial ceremonies held annually at the monument.