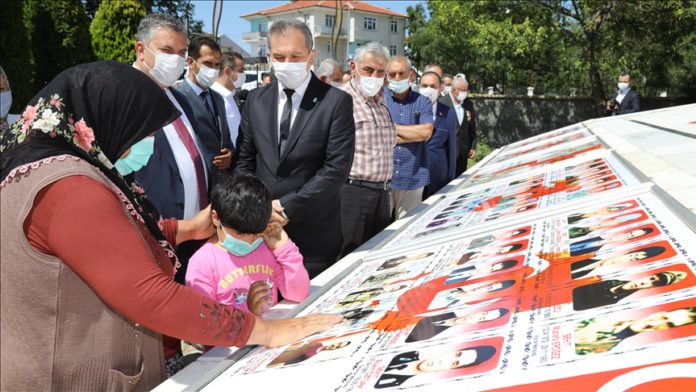 Turkey’s Communications Directorate highlighted the heroic resistance of those who sacrificed their lives during the defeated coup attempt on July 15 through a live broadcast to the international community commemorating the 5th anniversary of the fatal event.

To commemorate the day, ceremonies were held at the July 15 monuments in Istanbul and another in Ankara to pay tribute to the valor of 251 people, one by one, which was broadcasted live with a visual display in English.

“The purpose of the event was to draw international attention to the nation’s democratic victory, which was earned at the expense of people’s lives during the fight against the July 15 coup attempt,” according to the directorate.

Following the brief introduction on the defeated coup, the event begins with the account of Sergeant Bulent Aydin, who was dubbed “the first martyr” of the July 15th night.

Aydin worked in the Special Operations Department and had retired five years prior, but he kept working because “he was still young,” as he described it.

Resisting the defeated coup plotters, he tried to hold on to the Turkish flag in front of the General Staff Headquarters.

Aydin, 47, was married and father of two when he was killed by the coup plotters.

“He was smiling when he fell a martyr,” mentioned in the event.

Burak Canturk was another person whose tale was mentioned during the event.

Canturk, 23, studied at Balikesir University and supported himself by working as a waiter at a restaurant in Istanbul’s Cengelkoy during the summer.

The coup plotter shot him in the region that night.

Burak Canturk’s colleagues set up a remembering corner with his images inside the restaurant to keep his memories alive.

“We will never forget what he did for this country,” read sentiments of the restaurant’s owner and colleagues about Canturk during the program.

Cennet Yigit, 22-year-old, was one of the youngest victims of coup plotters.

She was a deputy inspector at the Special Operations Department in Golbasi, Ankara, when the coup plotters bombed the office building.

Yigit was single at the time, but she had a month to arrange her engagement.

When Yigit was killed, it had only been 10 months since she began her childhood dream of becoming a police officer.

Omer Halisdemir, who was martyred after killing a senior coup plotter, became a symbol of the Turkish nation’s resistance against the defeated coup.

When pro-coup Brig. Gen. Semih Terzi attempted to seize control of the Special Forces Command in Ankara, Halisdemir shot him in the head. He was later martyred by pro-coup FETO-affiliated soldiers with dozens of bullets.

“Special Operations solider Omer Halisdemir had a great part in preventing the coup attempt by fulfilling the order of Special Forces Commander Zekai Aksakalli, to shoot the coup plotter general on July 15,” reminded in the event.

Halisdemir, 41, was a married father of two children.

The ceremony was live-streamed on the Presidency’s Directorate of Communications’ social media accounts.

Turkey marks July 15 as Democracy and National Unity Day with nationwide events to commemorate those who lost their lives fighting putschists and to remember the bravery of the nation.