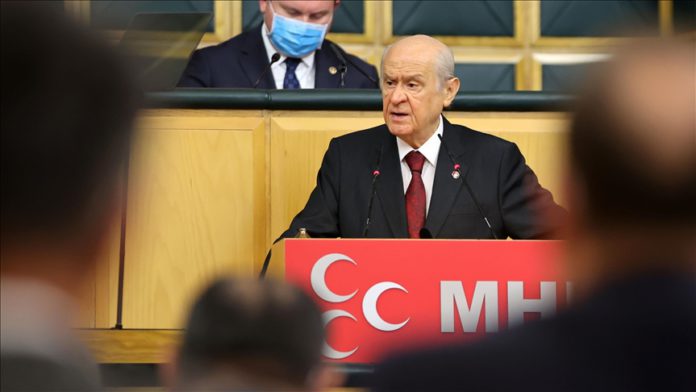 Devlet Bahceli, the leader of a prominent Turkish political party, on Tuesday called on his peers to come together to make a new Constitution.

“It is necessary to erase the traces of the parliamentary system, to clear its remnants. There should be a wide consensus on writing the new Constitution in line with the spirit of the presidential system,” Bahceli told his Nationalist Movement Party’s (MHP) parliamentary group.

The Turkish public opted to shift to a presidential system in an April 2017 referendum.

Turkish officials have touted the benefits of the new system, saying it eliminates inefficiencies and enables the smoother working of the administration.

Recalling that his party’s attitude was “very clear” on the issue, Bahceli said that other parties were also demanding a new Constitution.

He added: “The Nationalist Movement Party is in the process of drafting the Constitution from the beginning and has started its work sincerely and without prejudice.”

Erdogan stressed that the constitutional work must be done transparently and the final text must be presented to the nation.