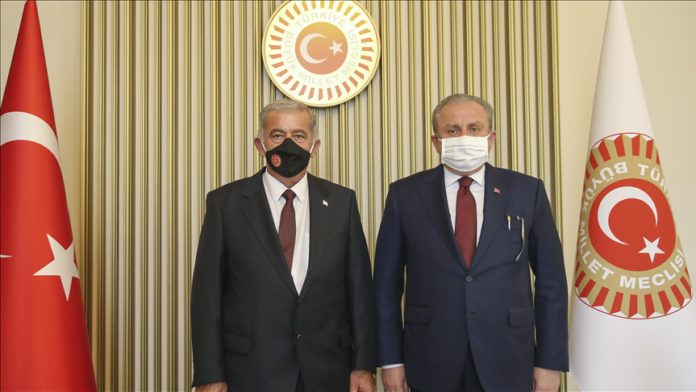 The Turkish parliament will continue to stand by Turkish Cypriots as it has done in the past, its speaker said on Tuesday.

Mustafa Sentop made the remarks after a meeting with Onder Sennaroglu, the parliament speaker of Turkish Republic of Northern Cyprus (TRNC), in the capital Ankara.

“We have full confidence that Turkish Cypriot people will get what they deserve,” he said. ”Our brothers in Northern Cyprus will not be alone under any circumstances and will find their homeland by their side in any difficulties they face.”

Sentop said the island’s two-state solution is a long-term process … and the Turkish parliament will continue “to stand by the TRNC and Turkish Cypriots.”

The island of Cyprus has been mired in a decades-long struggle between the Greek and Turkish Cypriots, despite a series of diplomatic efforts by the UN to achieve a comprehensive settlement.

Turkey’s military intervention as a guarantor power in 1974 stopped years-long persecution and violence against Turkish Cypriots by ultra-nationalist Greek Cypriots.

Sennaroglu later visited sections of the Turkish parliament that were bombed during the defeated coup of July 15, 2016, orchestrated by the Fetullah Terrorist Organization (FETO).

Meanwhile, Sentop also received Maria Mezentseva, the head of Ukraine’s delegation to the Parliamentary Assembly of the Council of Europe (PACE).

He said Turkey has always backed the vision of a modern and prosperous Ukraine “with its territorial integrity assured.”

“Today, we stand by the Ukrainian authorities and the people of Ukraine in their efforts in this direction,” he said.

‘Turkey will always have TRNC’s interests in mind’